Andrea Canepa (Lima, 1980) is having her first solo exhibition in the Netherlands at De Appel until the 28th of August. An Interior Motion reflects on scores in architecture and facilitates an environment where people can relate to art through their body. Spaces don’t come with instructions, yet, we uniformly engage with the forms and functions of space as one; you walk through door frames, you sit on chairs and descend your back on their backrests, and you follow curtains as they compartmentalize your access to space. Canepa invites the visitor to engage with De Appel’s Aula through a series of sculptures and open-ended scores in an effort to create relatability between people and modernist architecture by encouraging the visitor to question normative ways of using space. The underlying question that Canepa poses is, how can we give new meanings to a space?

Founded in 1975 in Amsterdam, De Appel is an evolving arts centre with a unique threefold structure combining a living Archive; a hands-on Curatorial Programme; and Education Initiatives that is driven by deep community engagement. The following  is a conversation with the artist about An Interior Motion.

An Interior Motion by Andrea Canepa is on display at De Appel, Amsterdam until the 28th of August. 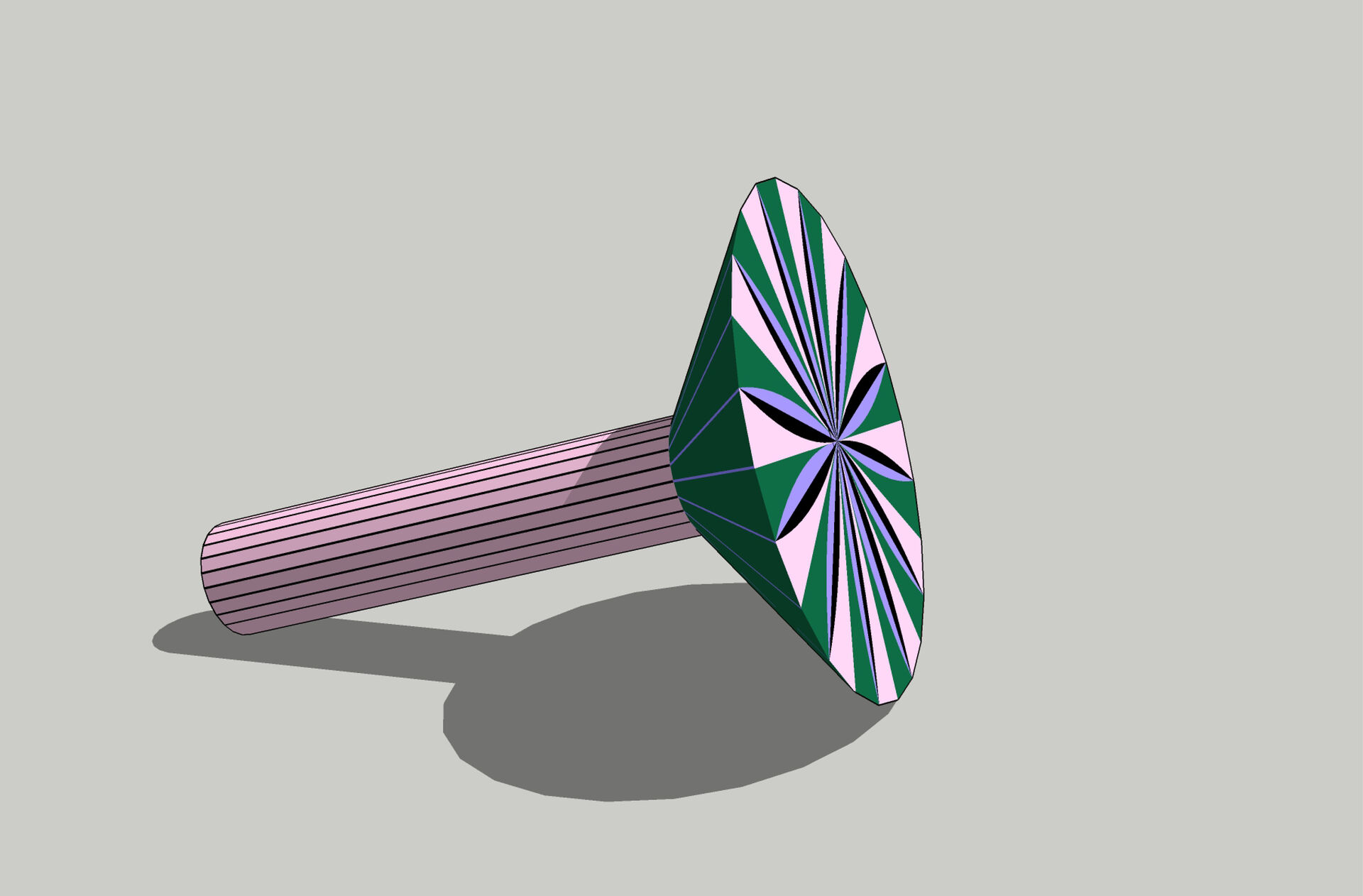 I always like to start these conversations by asking for context. Can you tell me more about the name An Interior Motion?

It was a discussion with the curator that started it. My first idea was to call it “an interior score”, but we decided for motion because it was more related to movement and interiors. The whole exhibition is based on the architectural details of the interior of De Appel’s building, making it nice to refer to the physical interior in the title. Though, important to note is that the experience of the piece invites one to think beyond the physical and into a person’s mental or emotional interior as well.

I definitely felt that during my visit. Speaking on the piece’s site-specific nature, does An Interior Motion reflect on Dutch culture?

The first thing that the curator directed me towards was a book about the building. He sent me the book and I thought that it was going to be super boring, but it wasn’t. It was really interesting. The building is very much connected to Dutch history and it’s through the building that I feel that the exhibition is connected to the culture. The history of the building reflects problems related to the evolution of modernity from the 1960s onward and immigration issues in the Netherlands, concretely in the context of the Nieuw-West neighborhood.

I see how strongly the two are connected, especially considering that An Interior Motion consists of 1:1 scale sculptures that imitate structures within the building– it’s like one can’t exist without the other. It seems as though you’ve done a lot of like pieces in reaction to spaces from 2015 onwards. I want to know, do you see your work as experiential or also functional in the mundane?

I think some of my pieces work best as public art. The first public art piece I made (Detour Structure, 2019) was a sculpture that people could interact with.  When working in a public space I like to make pieces that can be used and that function as an invitation. An invitation for the body to engage, to get out of its routine and move in a different way. The artwork is something that is there, you can engage with if you want to or ignore it if you don’t.

I really appreciated An Interior Motion for inviting me to engage with it through a pamphlet containing diagrams of different sculptures with their corresponding instructions (scores). What was the thought process behind that? I know you place a big emphasis on how spaces do not come with instructions with how to use them. 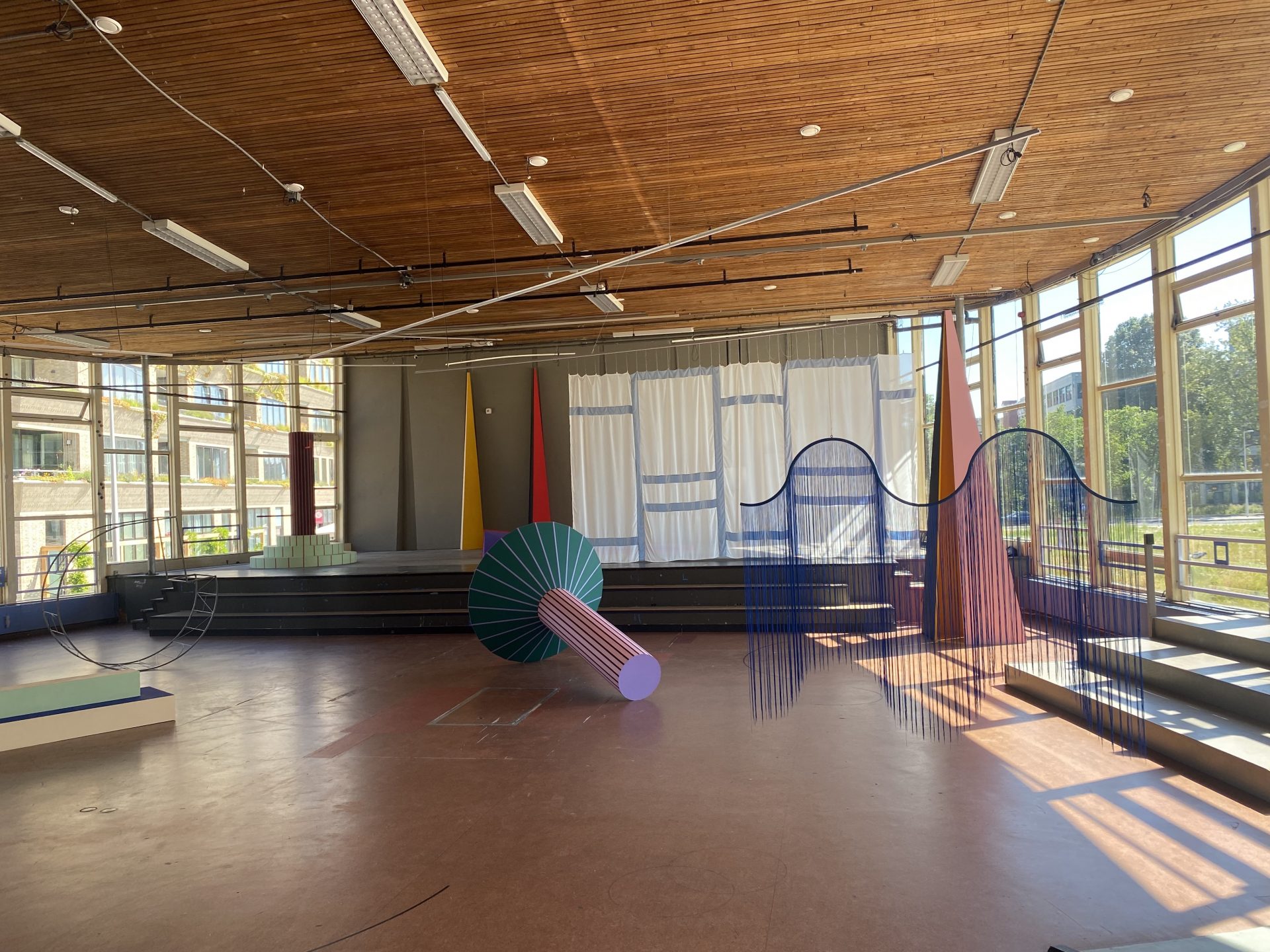 For me, a very important part of the exhibition is the score; this work and my other works about space all have to do with how we use space. The way I see it, space and the objects in it can be understood as scores. A chair, for example, can be a score. Its shape is already dictating the way you should sit on it. Its form is defining the normative mode of the act of sitting. I think of architecture as a score in that sense as well because architecture kind of guides your movements and channels how you interact or move within a space. In this work, I address this idea by creating a score to complement the sculptures. I am very interested in exploring how free or creative one can be within certain constraints. What I find most intriguing about games is the challenge they provide as closed environments with defined rules, where creativity is called upon while working towards a goal. That’s what interests me about play, the way we navigate its rules. While living in Maastricht, I got to know two artists that were very much interested in this as well; we had a group called Scores and Structures where together we tried to think about how to create open scores. The challenge was: how can you design  rules, or create certain constraints, in a way that doesn’t choke you? That’s what I tried to do in this exhibition by making the pamphlet with instructions that are quite emotional and very much open to interpretation. 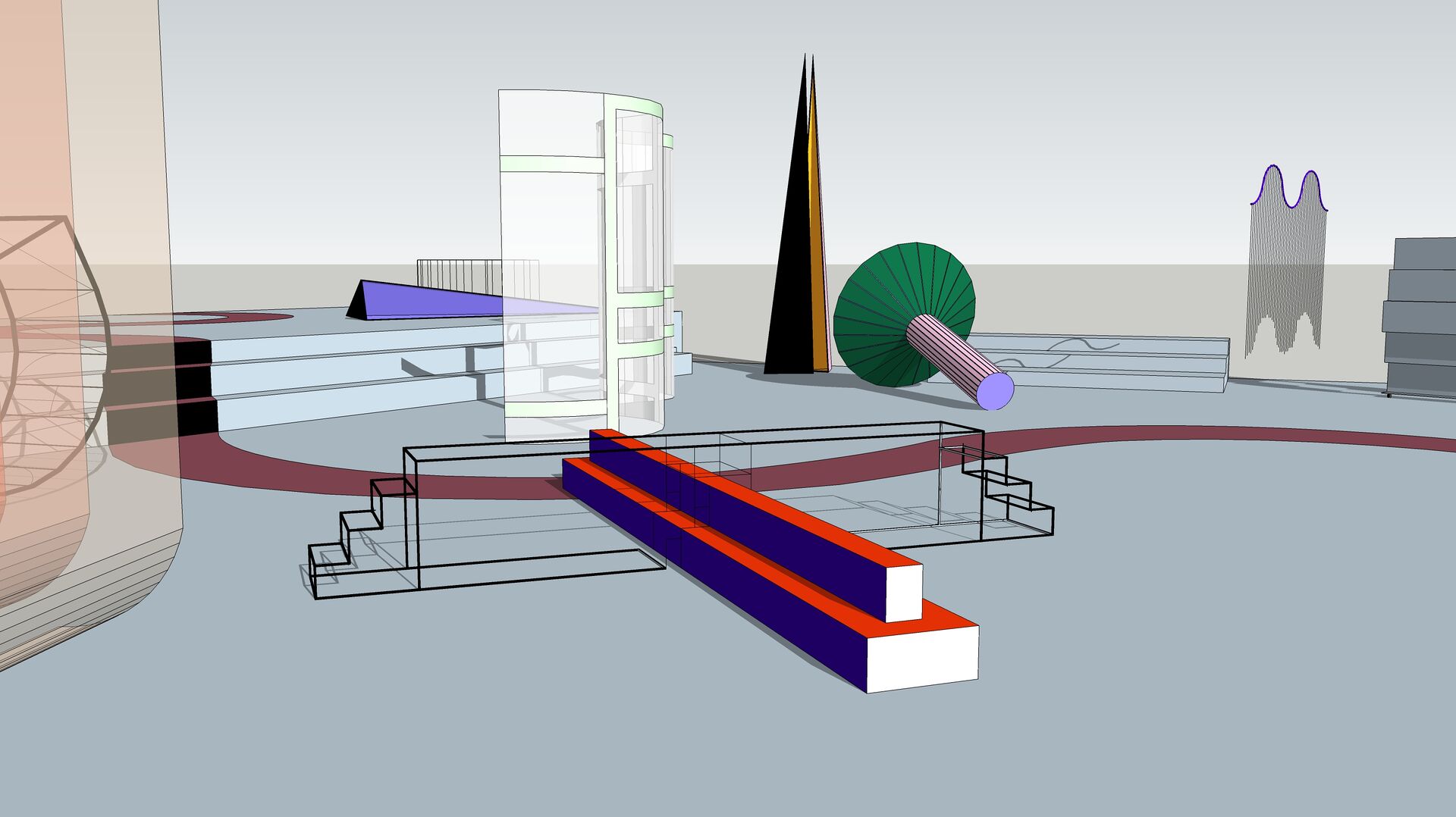 How did you do that?

This time around, I didn’t make the score until first testing it out with the performers. I worked with three performers who did a live choreography on the exhibition’s opening night. I created a mockup score to have something to start with but waited to see how they reacted to the pieces before making the final version. The final score ended up being very different from the one we started from.  It felt so much more organic because of this process. This type of approach was so important to me because I think these modernist buildings, like De Appel’s, have a very top down approach. Modernist architects were not always fully understanding the needs of the people who would inhabit their buildings. They brought to life these beautiful buildings, but people didn’t really relate to them the way the architects were expecting. I wanted to change that approach by doing something where the discourse is built by the people who are actually using the pieces.

It’s like walking away from the white cube effect and into what feels relatable. To what extent did you want people to interact with these pieces the way that you instructed them to with your score?

The score that I propose with this exhibition is just a suggestion. In one moment we were even thinking of attaching a paper into the pamphlet with blank spaces so that the visitor could fill it out with their own instructions– to create your own score.

What do you hope to challenge with this score? 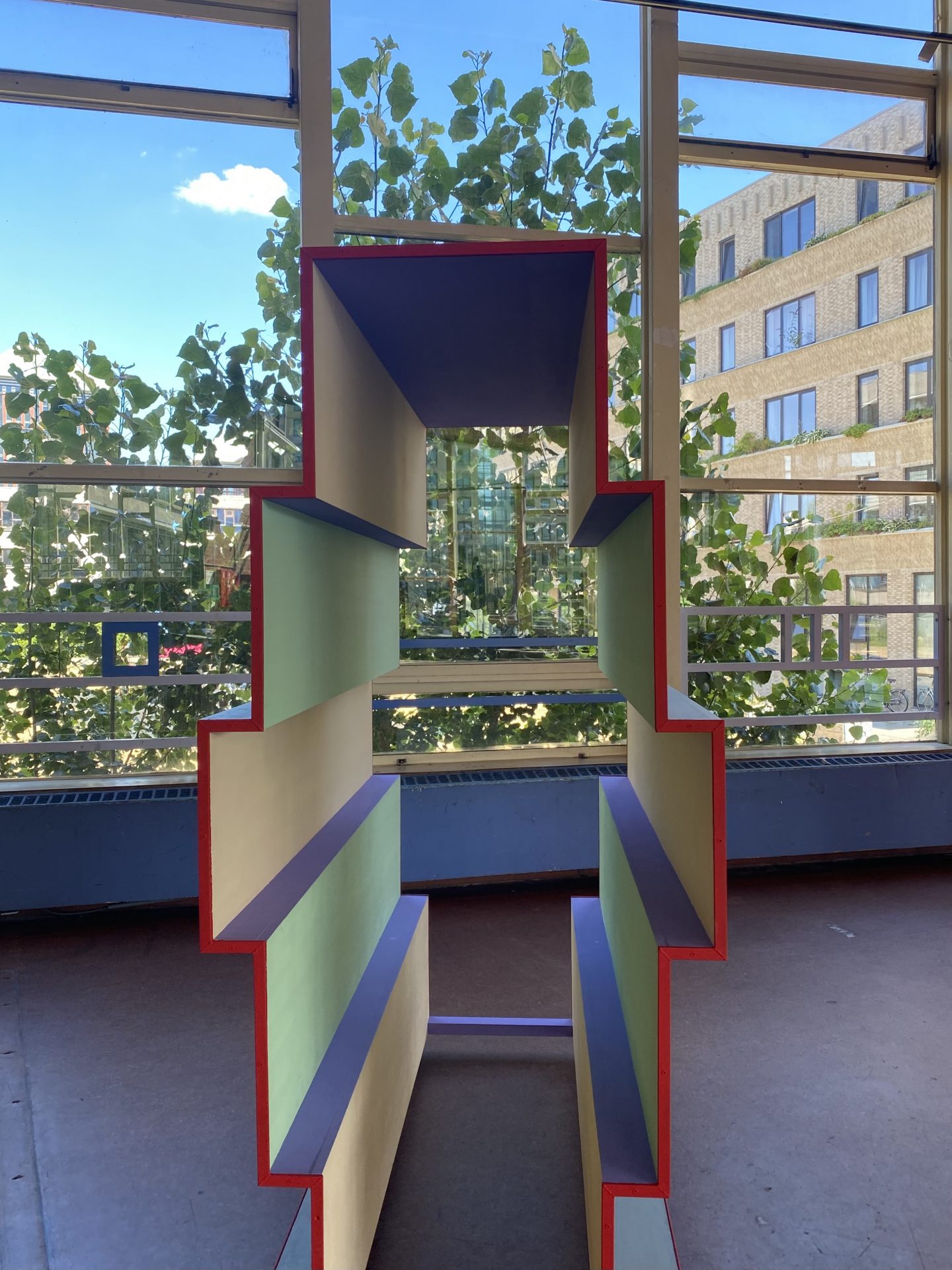 It’s very simple. I want people to think about how we can give meaning to infrastructures, especially to all of these leftovers from modernism, by activating them with our bodies, our movements, and our feelings. You know, how can we use them in a way that benefits us? How can we give new meanings to these buildings?

That makes perfect sense. Have you been able to observe how people have been interacting with An Interior Motion?

Well, I was only able to be in Amsterdam for two weeks so mostly my experience has been from installing the exhibition and the day of the opening. The kids were the first to seize the opportunity to interact and that was very nice. But for me it is important that the adults also interacted and engaged with it.

And I think it worked. When visiting the space, all I could think of was “I want to run my fingers through that blue sculpture.”

Exactly, I really like the idea of people relating to art through their body.

Especially as adults whom don’t usually get invited to interact with objects like this. You know, kids have their playgrounds, but adults don’t really. I know that there’s one month left to this show, and I was wondering, who do you hope will come and participate? 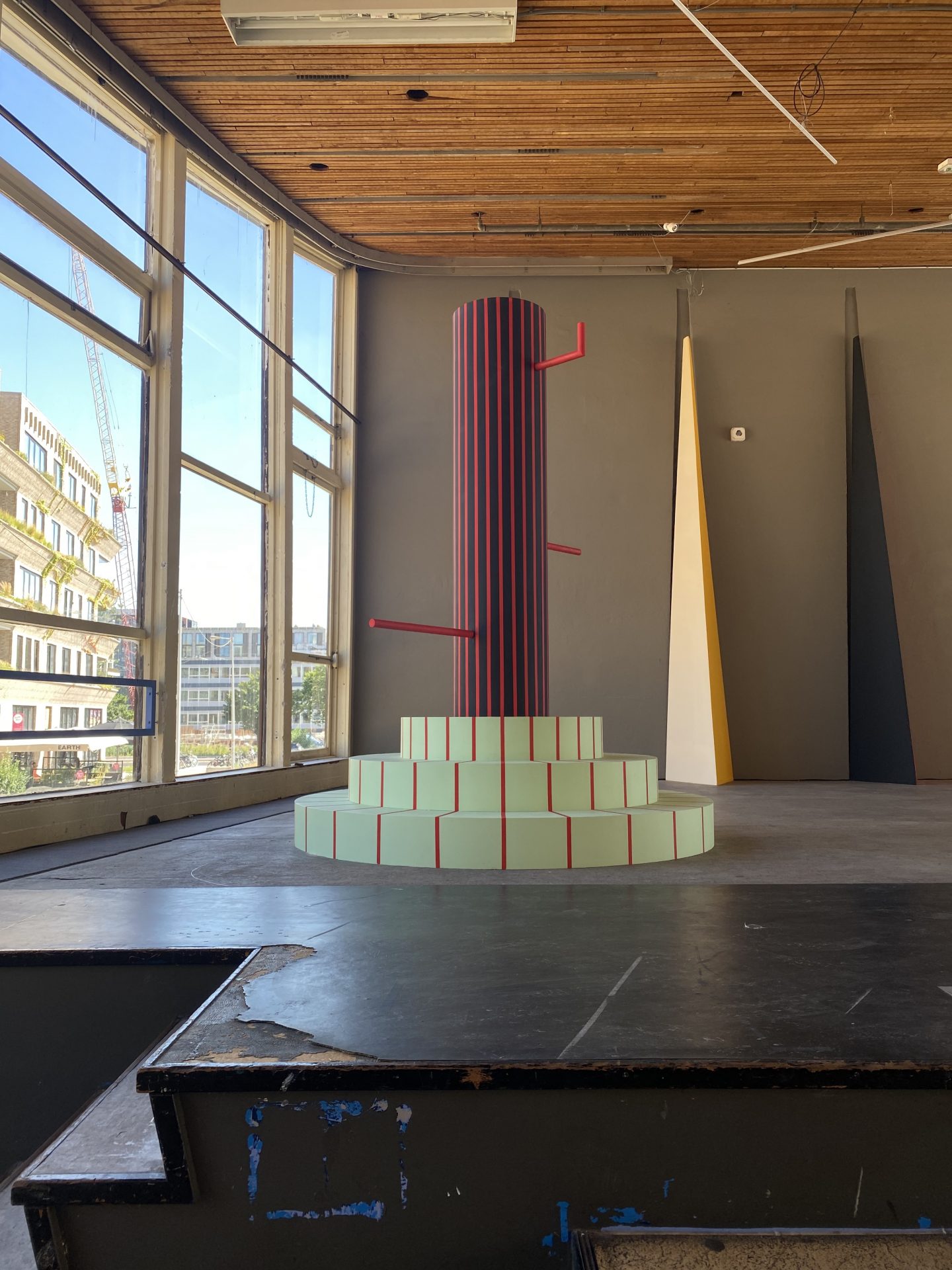 Everyone. I hope that everybody that comes to see the show, even if they don’t do anything crazy, at least touch and move things around, you know? I wanted this to be a very experiential show. A dancer that I know once told me about a popular saying from the Asaro people from Papua New Guinea: knowledge is only a rumor until it lives in the muscle. I believe that knowledge must be embodied and so I have looked to address that with my work, especially in An Interior Motion. That’s also why I named the first piece where I worked with the body and scores Until it Lives in the Muscle.

Wow, I love that line.

Andrea Canepa’s An Interior Motion will be on display at De Appel until August 28th, 2022. De Appel opens Wednesday – Sunday 12:00 – 18:00. Read more on the exhibition here and more on the artist here.