A2B2 started as Andy Morin’s chat handle back in 1992. A personal token to the musician and engineer, which he wielded as a place to vent, tease, experiment and, at some point, invite people into. A relic that’s preserved, worn, and recycled into a social medium, and then, into a community, both on-and offline. Now, A2B2 allows members of that community to mine and drill through its fundaments, molding a multi-story cavern that blooms with vigor, glitches, mold and rays of light. I spoke with Andy Morin about the creative hub.

A2B2 often run bounties on their website. These bounties are temporary moments where people can submit their art, based on a prompt. A2B2 was so kind to run a bounty for this issue of Sprout, prompting ‘Temper’ on A2B2.org. Have a look at a handful of the submissions here. This interview is published in Issue 9 of our publication ‘Sprout‘ – exploring the theme of Temper. Find the full issue here.

Hi Andy. In each issue of Sprout we explore a particular theme. This issue carries the theme ‘temper’. To start off: what does the word temper invoke to you?

When I think of temper, I think of someone throwing a tantrum on Twitter. People are super pissed on there all the time. Social media provides such a warped, fun-house mirror view of the world. And everyone’s addicted. I feel weird when I stop and think about it.

Almost exactly a year ago you stated that: “A2B2 is an alternative creative community of musicians, gamers, artists, and technophiles. This is from Google’s perspective.” Is it still that?

Yes, though it’s grown significantly since that time. This has both good and bad aspects for us.

A2B2 isn’t reliant on advertisers to run. We’re super selective about who we allow to participate. And it’s possible to do interesting things here without ever needing to ask for help or permission. I enjoy the autonomy.

“Like growing as a seed of wheat, and then being twisted and baked into a croissant.”

What is A2B2 from your own perspective, rather than Google’s? If those two can still be separate these days, that is.

To me, it’s like I’m looking up at the blanket of stars in the sky, and I naturally begin to trace and draw lines around them and say: “oh, this group is a crab, and these ones are an ibex, and so forth…”

Your initiative is inspiring for a lot of people. It also sounds like a lot of work. How do you keep up the stamina?

I wouldn’t say motivation has ever been an issue for me.

Could this also be read as that you would do anything to achieve your goals?

A definition of temper is a ‘state of feeling’ or a ‘frame of mind’ at a particular time, dominated by a particular (strong) emotion. How did your frame of mind change over the development of A2B2 – starting as your chat handle back in 1999 and growing into a creative community in the form it has now?

I would say my mentality has undergone a series of drastic transitions over that time. Like growing as a seed of wheat, and then being twisted and baked into a croissant. Early chat rooms were super cool, because you couldn’t really easily send images. It was so hard, even if you had a scanner. So, it was hyper-anonymous and had its own language. Currently, all the identity-based stuff going on feels totally different and not as cool at all. I always liked chat as its own thing. I like making my own smileys =). I think the way I present myself online now is not all that different than how I used to present myself in person. I still don’t like to be overly extroverted. When I was young I was shy and avoided attention. 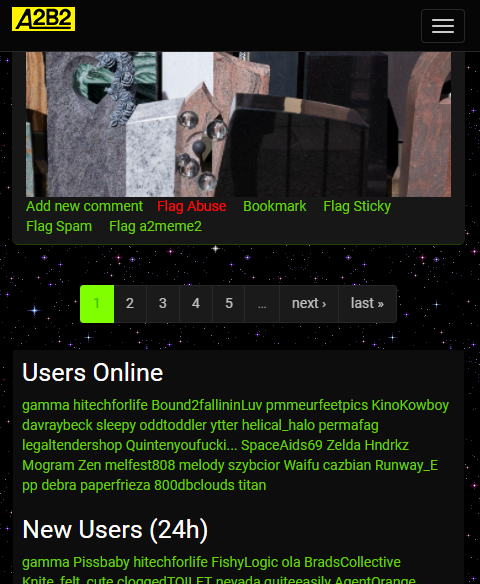 I would advise to always speak your mind, don’t worry about what anyone else thinks.

How has your frame of mind been lately?

‘Alchemic nuisance’. I’m an ex-marketing executive – turned corporate dropout and solopreneur, who found and created my life purpose after an existential crisis.

What would you say this purpose is?

To make things cool. I want to do things that people are still talking about in 100 years. I love thinking. I’m addicted to pretty much everything to do with the creative process – video games, literature, painting, music, technology. But what really inspired me to start A2B2, is the feeling of wanting to give back and help others.

There is a core of A2B2 members that go back to the beginning, like TerryDev and Roundy. They go out of their way to create content for A2B2, and have said that the best part of doing A2B2 is that they “get to be A2B2.” How did that relationship start?

In the beginning, we always had too much to do and not enough time, so we were always asking for help with projects. When people stepped up, they were able to get progressively more involved in our projects. That’s still what we’re doing, but with more people and bigger ideas.

Did the A2B2 community have any influence in your perspective of what the platform is, and what it can or could be?

Absolutely. It’s had a life of its own from the beginning. I didn’t pick any of the original marketing team myself. From my perspective, they appeared out of nowhere like mushrooms popping out of the grass. The self-organization was amazing. The credit for Night of Fire 1 goes entirely to community members, who organized the lineup, created the visuals, and figured out the streaming.

What have (online) communities meant to you, personally?

When I was 14, playing UItima Online, nearly all of my socialization was through that game. I was married in-game and that made me very happy at the time. I also had a red dragon, a white wyvern, and an all-black nightmare horse. At one point, I had a forum artist do an airbrush-style portrait of my character. But when my school friends saw it, they teased me relentlessly. I was bummed. In retrospect it was magnificent. I would give anything to find that file.

Personally, in the past I have followed updates from the, notably online, community which resolved around your former project Death Grips quite a bit as well. How was your experience being a focus point and an agent in that community?

It often feels extremely odd to be the subject of so many different theories and conspiracies. The thing is, some of them are totally true. Other times, the opposite. In either case, the people spreading the information don’t know how far away they are, or how close they may have gotten. The thing is, with us, you never know what we’re going to do next… 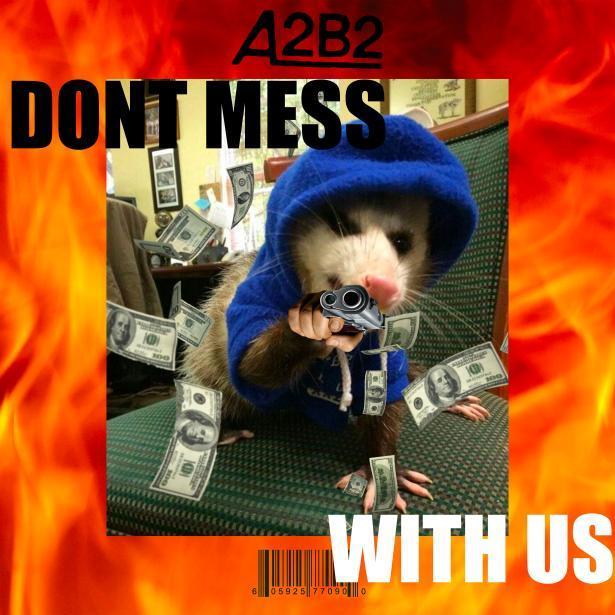 You’ve spoken about developing a framework for ‘Synthetics University’: “a reverse school that will pay students for learning”. Can you elaborate a bit more on that and its current status?

It’s like the extreme logical extension of one of our bounties. But, instead of asking you to provide a cool illustration or some story work, we’re asking you to actively develop a solution to the plastic waste problem, or develop a conceptual treatment for a new form of currency. There aren’t any limits on what you can ask people to make, and we’re genuinely interested in some of these things. We live in an outdated world, but we can and should strive to find and actualize new ways of making progress.

Can you tell us something about the vision of A2B2 Records?

It’s an incubator, taking the very best new stuff we can find and providing a boosted platform to put artists in an accelerated lane. Then, we require them to work hard, work consistently. And things begin moving that way.

What is the approach of tempering, or rather moderation, on A2B2? For instance with regards to outings of violence, abuse, discrimination, racism or hate speech?

We’re a punk values community. The same rules that apply at a show apply on the site: nothing hateful or phobic. Early on, there was more edgy shit and trolling. I clamped down on things like gun violence, or anything I perceived as ignorant. Swastikas, etc. It’s pretty easy to tell when something’s whack. Our moderation team rarely disagrees about stuff. The important thing is being responsive. Sometimes people make mistakes or genuinely don’t know certain things about the imagery they’re using. That’s ok, but you have to be willing to get good.

“The fungi are the decomposers, but they can’t eat take-away boxes.”

The first A2B2 magazine is themed ‘The Fungal World’, the second is titled the ‘Freedom Edition’. I personally couldn’t help but think about a direction: decay making space for freedom. Might be a bit of a stretch, but is there a narrative unfolding here?

It’s difficult not to freak out about all the trash and plastic waste we’re creating. There’s no way mother nature can just gobble up all the filth. Animals are suffering. Plants are suffering. The fungi are the decomposers, but they can’t eat take-away boxes.

We’re currently in Phase I of A2B2, which functions as an ‘image dump’. What about this form is of interest to you?

At this point I just consider it to be the best contemporary arts publication that I know of. Aesthetically, conceptually and energetically very forward and ahead.

Is there a dot on the horizon A2B2 is developing towards?

Sure, we’re the new MTV. Think 1994, when they had all the best new music going and were producing Beavis & Butthead. High level.

I’m working on my first solo album, and playing shows during the summer. Also, keep an eye out for A2B2: The Movie and Night of Fire 3 this year. Crazy. 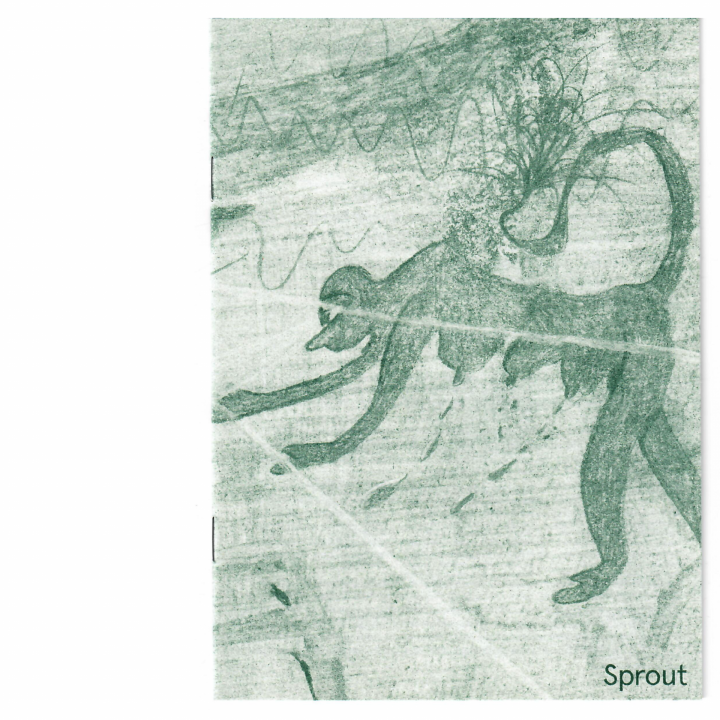