Thank You by Boris de Klerk and Olivier Herter

Taking a little look and reflecting back at Boris and Olivier’s time at the s105 it’s safe to say they know more about the meaning of time than any of us, right? They conducted research on ‘measurable time’ versus ’emotionally-experienced time’. In other words: clock time versus momentum. Like Monet painted his garden at set times of the day, only to find out how the sun fell on his garden at those hours, and how this inspired him to paint. In this way, Boris and Olivier also wanted to plan all daily activities as tightly as possible. The duo wanted to find out what forms of freedom and what kind of momentum can arise within a process as rigid as this, as well as if this would benefit or obstruct their artistic practices. The answer is both. 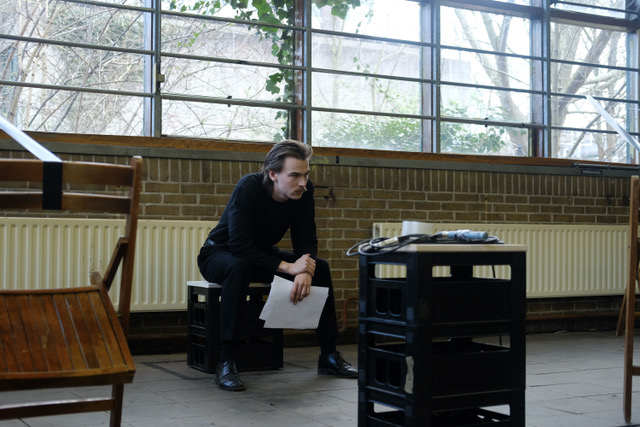 So, we know you guys have put incredible effort into your presentation, but let’s get down to the details everybody wants to know. How much tape, cigarettes, and coffee were consumed in the duration of your time here?

We’re not sure about the exact numbers, but let’s just say that it was way more than we, our wallets, our (mental and physical) health and the environment would have deemed reasonable.

“Creating your working conditions is half of your genius.” – Pablo Picasso

We have experienced, within our schedule, that though the schedule was exactly the same in measurable time, and the way our days were planned were quite comparable, some days felt extremely long, and others really short (this even differed between us individually) because you bring a different state of mind to the studio every day, which alters your individual perception of time a great deal. 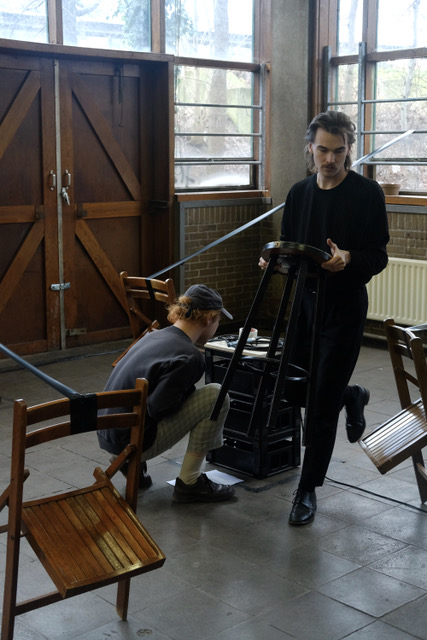 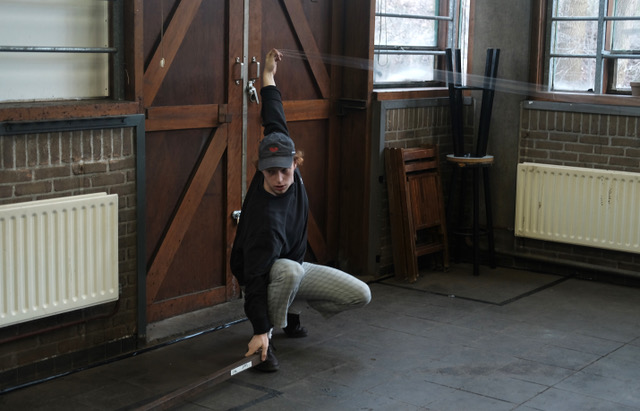 Your processes were conducted in isolation, what did this ‘seclusion’ teach you about yourself and the way you work?

One thing that kept recurring was our different way of creating. Olivier has a more conceptual way of working; he likes to dive deep into a subject, contemplate and write, finding different detours through which one can arrive at possible interpretations. Where on the other hand Boris is looking for more concrete and hands-on forms of translating an idea or the subject to the space.

So while Olivier was rewriting his texts over and over, Boris would walk around the studio taping chairs to the windowsills. This was something we had to find a certain rhythm in, especially in such a rigid schedule, but these approaches also turned out to be complementary to each other.

“while Olivier was rewriting his texts over and over, Boris would walk around the studio taping chairs to the windowsills.”

What was it like to pre-determine your day hour-by-hour? This might be the norm for a lot of people (and frightening to some), but how did this aid your personal development?

At times it could feel really restricting, not being able to follow a vibe or an intuition, being bound to a specific activity at a specific time. Really getting into a text or a soundscape, but having to play a game of trivial pursuit instead.

“Really getting into a text or a soundscape, but having to play a game of trivial pursuit instead.”

On the other hand, working with four or five ‘deadlines’ a day is sometimes a race against the clock where we would have no time to overthink. The fact that it, in- and outside the arts, is slowly becoming the norm in neoliberal and efficiency-minded society. 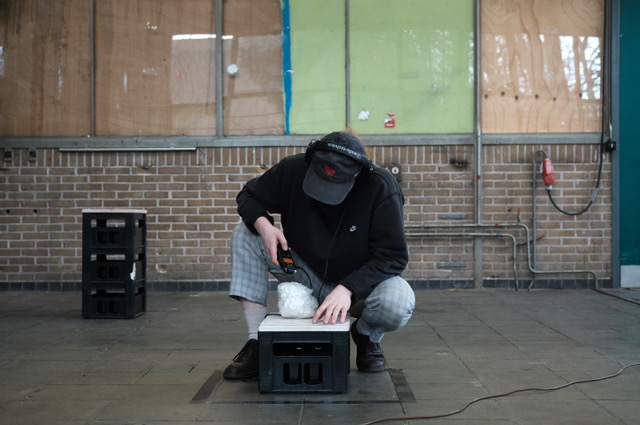 During your time at s105 did you have any ‘lightbulb’ moments?

Yes! We think every bit of material in THANK YOU is the result of a lightbulb moment. The decision to not have a seated audience, as you would more commonly see in a theatre space, but letting the audience walk around freely and be a part of the space and the performance by taking out the chairs, and taping them to the windows instead, was the result of a lightbulb moment. This was an important formal and conceptual decision, since it created a greater dynamic in the space during the performance, resulting in both a shared and individual experience of (present) time. Standing up is a more conscious and active way of being in a space than sitting down and emphasizes an experience of ‘now’.

After your weekly performances, you conversed with your audience and they gave some feedback. Did this benefit your development?

Absolutely. Having to translate our research and process to actual material was a really helpful dynamic in our process. Being able to dive deep on the one hand, but having a deadline to turn it into a presentation of some sort on the other, and being able to see and hear what the material did with an audience was insightful Big thanks to everyone who showed up during the open studios! 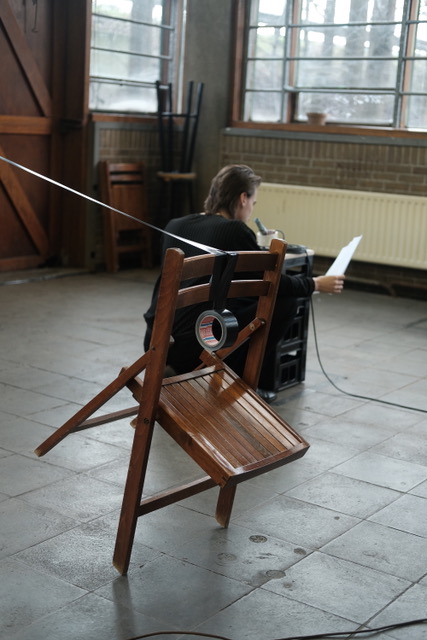 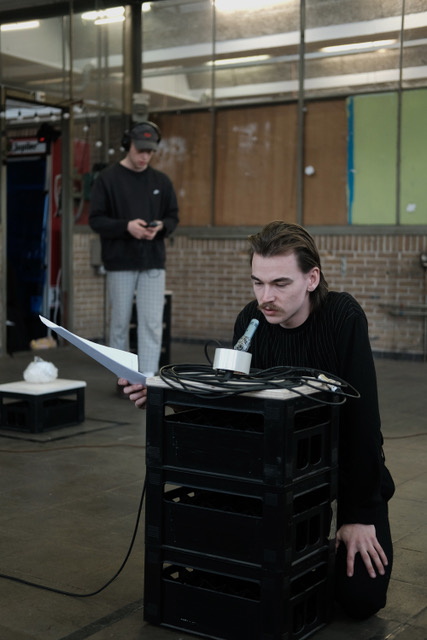 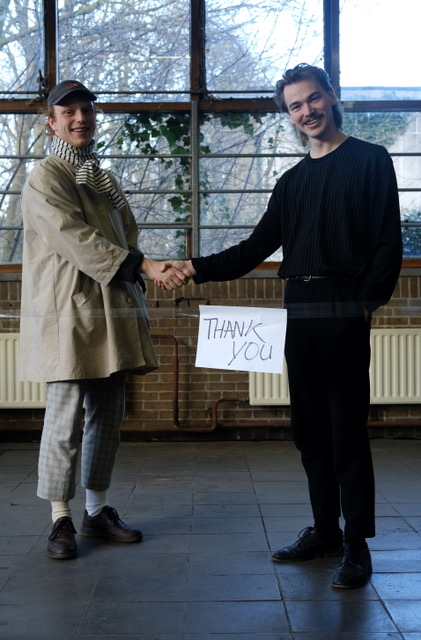 What goes through your mind when performing your presentations?

The performance consists of a lot of pragmatic actions (recording and mixing sound, rearranging the space, etc.), so a lot of the focus is on doing these things as exact as possible. We think of our presence on stage as more of a state of mind than an actual role or character. It’s a good exercise in mindfulness!

What does the future hold for Boris and Olivier?

Olivier caught a nasty flu right after the project, so we are taking some time to recover right now. Also, we’re working on altering the piece to a theatre-space at our school in Maastricht (we play THANK YOU the 20th, 21st and 22nd of February at the Toneelacademie Maastricht). But we know for sure this won’t be the last time that we’re working together! We’ll keep you posted.