The Rest is Noise: BRAIDS at Muziekgebouw aan ‘t IJ, Amsterdam on 10 September marks the second occasion of Frames By. Curated and produced by Pllant/Marieke van Helden, we’re extending our exploration of talent to the visual realm, merging the live musical performances with the visual expressions of local artists. This time around we’ve invited local experimental design duo Lara Tolman and Selina Parr, better known as the collective, NOMAN. We get in depth with the pair, dissecting their origins, working relationship, The Stepford Wives, Sylvie Fleury, China and just about everything else.

Firstly when I was asked to do the interview with NOMAN I had this weird association with the fantasy novel of William Nicholson called Noman (2007). He writes about The Noble Warriors – so I have imagined you as the ‘you’ as the ‘four eyed warriors’ that seem to be in constant dialogue with each other in your works. Now I am very curious, where does the name NOMAN come from?

It’s funny that you mention warriors, we often refer to our sculptures like that, but only when we talk among ourselves. Our installations mostly form groups of sculptures that could look like an army. However, the name NOMAN does not come from that direction.

Selina used it before we started when she did an exhibition with another woman presenting two women’s (fashion) collections. The name NOMAN, was then simply derived from the fact that we were no men. The nomadic reference gave the whole a certain sense of freedom. But what made us choose the name later as permanent representation of ourselves was that we wanted to work together under one name, ‘as one’ without egos. Additionally, the combination of letters and the visual aspect of the name – it’s sort of symmetric but not quite – as well as the simplistic zigzagging angles of the letters and the circular ‘o’ drew us to NOMAN.

As I understand it, you have know each other for a long time and met at the Academy in Arnhem in the Fashion department. This strong dialogue you use on your website seems to refer to the almost instinctive reaction to each other’s gestures. In the creation of your NOMAN installations, I was wondering if it had already sprouted in that moment? In other words could you tell something about your background; how and when you met each other and what was the foremost reason for you to start this symbiotic partnership with NOMAN three years ago

Since the day we met we have always been close/best friends! But we never thought about collaborating until we tried. For the Mode Biennial Arnhem 2011 we worked together on an installation. This went so well that we started talking more and more about making things together, to create a new world, our utopia.

When looking at your more sculptural installations I feel there is a strong angle to look at; I almost can imagine a stage in front of it, like a theater setting that of a ‘mis-an-scene’ set-up. I am curious how you would direct the public to access your works? Should they interact and/or even become part of the experience of these ‘worlds’ that you are presenting?

We give common objects out of everyday life a new meaning. We create, as it were, a personality for them. By putting them in a group formation they start to become a family, or a super organism. Our installations should capture the viewer in a strong atmosphere when entering them. The viewer could indeed experience it as a scene from a movie featuring abstract characters. This is what we want, we don’t want to make works that are distant or one-dimensional. We want our work to cover you and include you. We don’t want it to be bossy. We therefore don’t give any instruction or direction of how to perceive our work, we don’t decide what is the front or back. Also the size of a work is important and how this relates to the human body, it can make a work accessible or overpowering. It is crucial to make all the right decisions to reach the correct energy of a piece.

All your work looks very impeccably made, and therefore suggests a strong link to the features of an area where art merges into design and visa versa. Though you mentioned you clearly title yourselves as artists, I was wondering what your studio looks like. In other words, how should we envision the process (as in what form does it take) of these faultless and professional looking installations? How do you start? Do you make drawings or models or does your process mostly find itself in the cleanness of drawing and/or designing on your computer?

We always start out of a common fascination for an object. Lets take the OSMAN project, as an example. We used Turkish traditional hand knotted carpets. In the first few weeks of the process our studio is a mess of thousands little papers with notes, or tiny models made with toothpicks. Then we decide the exact way it will look and we start making calculations and drawings in 3D programs. In the beginning we didn’t even use the 3D programs, we used drawings and a calculator. So the next step is the actual making of the work. We like to do it ourselves, it is a part of the process we love, but some things are better done by experts. With the OSMAN project we also worked in Istanbul 3 times to get the designs for the carpets finalized and knotted by the crafts people. Every project asks for its own process.

You’ve been invited to show a loop of the video work The Final Work Should Be Wonderful, where a series of model-like gazing girls are in a serene circle within a grey backdrop like that of a photo studio, at The Rest Is Noise: BRAIDS at Muziekgebouw aan ‘t IJ on 10 September. While seeing this video of perfect girls I felt almost the same discomfort of perfection as seen in The Stepford Wives, the satirical thriller after the novel of Ira Levin (1975) where perfection becomes so alarming that a robotically or inhuman (NOMAN?) implication comes to mind. Both coming from fashion backgrounds, is the search for perfection in the color, composition and even materials an issue for you to criticize or compliment in your works?

We are very perfectionist people, both… We like to present work with a finished look, because it’s very much about aesthetics. We are not machines though, so there are imperfections and little mistakes! Craft is very important for us, we appreciate well made things and crafts people who practice their work to the point of perfection. We feel like this is often lost in art. Being able to control a material used to be the most important asset for an artist, now it seems that philosophy is more important than the actual work. For us they are equally important.

With the models we used to construct the film, the kissing game, the colors of their clothes and lipstick, the voice-over etc., we compose all these different ingredients to portray a certain feel we have at the moment. Fashion is not the subject in our work, but we can’t say that we are not attracted by beauty or fashion. There is of course a reason why we chose to study it, but there is also a reason why we chose to leave it…

You have probably seen the work of artist Sylvie Fleury. In her installations she also refers to modeling, fashion and high brow culture and appearance, and criticizes this by adding a load of visual humor, presenting suggestive remakes of objects and adding a clever reference to the almost Walt Disney like use of size, look and feel of the objects or sculptures. Your works seem quite serious in aesthetic and can go either way, condemnation or accolade. Could you explain a bit more about the idea and context that lies behind this video work, and the position you take in The Final Work Should Be Wonderful?

We personally are critical towards the pace of consumption and the suffocating ideal of a woman. We do believe that we are heading to an imagery were the un-normal is getting more normal. Nevertheless, we don’t start making a work with these clear defined lines of ideals. We feel that in order to clearly express our world, it is not necessary to be literal. The irrational intuition gives a much broader vision and is able of capturing a broader spectrum of who we are. Nevertheless, our works will always represent our beliefs.

NOMAN obviously works as a strong relationship and dialogue between the two of you. I was therefore wondering if you could imagine expanding your collaborations. That is, working with other makers and thinkers? Or would addition of other minded creators break this almost perfect circle of NOMAN’S world?

Our world is very confined to two of us. We have tried it before, it is possible, but it misses the magic that happens when we are just together. What we have is special. We get into a realm where we understand that something needs to be moved a cm to the left. We speak the same visual language and often in conversations we will say the same thing at the same time as well. What we can imagine, is us creating a work around another work or product.

I’ve noticed a strong visual reference to opposing cultures and an eclectic assemblage in your installations. You could say you freely mix and match a large range of cultural identities in your NOMAN language. The next project of NOMAN will take place in China. You’ve been invited by Salon to present yourselves during the Design week. As China is a country with a powerful, scrupulous and complex visual culture, I wonder how you will approach this. This new project challenges you to go into the experiment of working only two weeks in China and act in an immediate response in the context of China.

It will be a challenge, to create a work so large and complex as we usually do in less than 2 weeks. We want to make a site specific work that really applies to our location, which is an old building in the Hutong area of Beijing. The plan is to choose 1 material to work with, for now our fascination goes out to bamboo scaffolding. We want to place pole constructions trough out the building that seem to be keeping the walls apart or together. Still the plan is not for sure yet.. We will finally decide when we get there.

Catch NOMAN’s visual distillations of reality on Tuesday, 10 September at Muziekgebouw aan ‘t IJ. They’ll be showcasing a series of looped visuals prior to and following the musical acts. And, for the next Pllant curated Frames By, we’ve invited Subbacultcha! stalwart Wouter Venema of Mike Koldin to cook up something special at Amen Dunes at OT301, Amsterdam on 3 October. 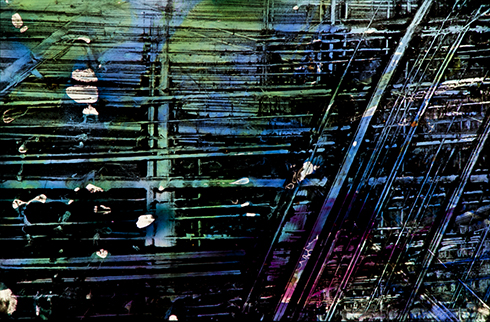 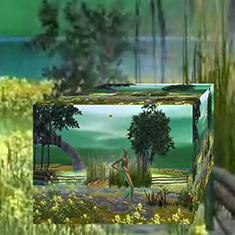 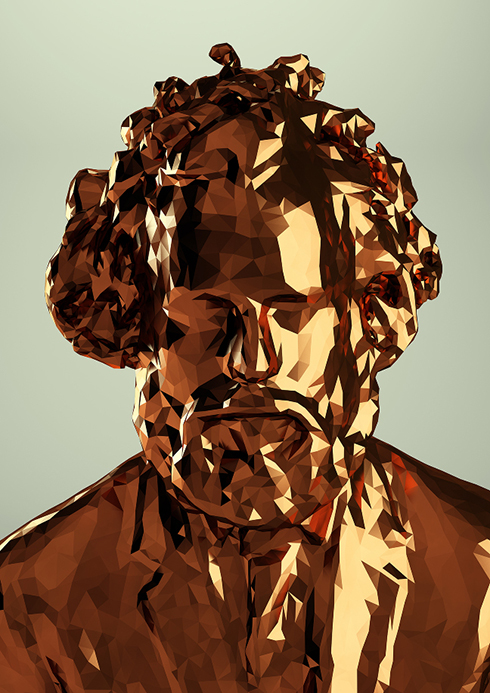 On 5 July, we are rolling out the first of our completely immersive experiential environments. Curated and produced by Pllant/Marieke 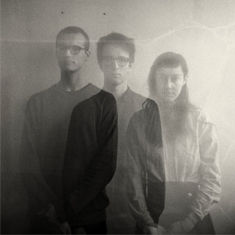