On a rainy November day last year, we headed over to the Lloyd Hotel, where we sat down with Animal Collective’s Dave Portner. The friendly, slightly jetlagged founding member, known also by his moniker Avey Tare, shed light on the bands intentions with the new Painting With that is out today, 19 February, on Domino.Why sunny sounding album is set out for release in February just might be a golden strategy – we felt that now if ever is the moment to step back to that November afternoon and the chat around the what marks Animal Collective’s tenth studio album.

Great that there’s a new AC record! Something that was immediately apparent while listening to this record was that rhythm is the driving force behind it. And also there’s a certain density of sound, there’s no stillness. I immediately wanted to dance to it. Was it your intention to make me dance?

Sort of yeah. We said: Techno Ramones. We wanted to make something concise and direct, but coming from a dance/ techno/ electronic kind of place. Then when we were in the studio we wanted to make it a bit more organic, so that it didn’t sound like completely electronic.

Previous albums had some screams on it, but now I only heard nice vocal harmonies, no crooning, but still warm and nice.

Yeah, I think it was a conscious decision.

And these strong melodies!

Thanks. We all just love melody. We see it as our job. At one point I was saying to Noah: ‘This is gonna be difficult’. He said: ‘Well, if it wasn’t difficult then it wouldn’t be our job.’ That’s the challenge of it.

Singing together can also be challenging. It’s easy to be out of tune.

It’s something we’re used to and luckily we sound pretty good when we’re together. We’re very particular about it and work really hard to get it right.

There might be little things here and there in the past that we needed to mend, but we used Melodyne for that. Autotune is very transparent. You can hear it.

Do you have an effect you keep coming back to?

There aren’t a lot of vocal effects on this record actually. One cool thing I like is pitch effects. A long time ago I would read about the Beatles. On their more psychedelic records they used a lot of pitch effects to get these offsetting and otherworldly sounds. I thought that was cool. For this record I used my tape machine to do some pitch bending.

The album sounds very structured and somewhat contained, not so much emotional.

Yeah. Do you think that’s bad?

I’m wondering how these songs will be live.

There’s different kind of songs, for something like our last record Centipede Hz, at least for the songs I wrote, I wanted to leave the songs open for that, for me to be able to get into. Playing live will have that element. I was going through specific emotions and wanted to leave the songs open for that sort of expression. I think any song I write will have that element to it. Maybe one reason these songs don’t have that feeling is that we haven’t played them live before getting into the studio. And that’s when that looseness comes in. It becomes boring recording it after playing them live. That’s why we did it this way, so we wouldn’t get used to anything.

Sometimes we’ll look up words, and use Thesaurus for instance.

Would you say this album is an extended version of the previous record?

There will always be something inherently Animal Collective about the music that we do. It might remind somebody of Sung Tongs or any of the records. Hopefully it’s a step in a new direction.

Do you compare it yourself?

We try not to. It’s hard not to though. When we’re aware of it, we always say to each other we shouldn’t do that.

The way you use words, it’s sometimes like you’re making up your own language, using words for the way they sound and not for their specific meaning. How do you choose the lyrics?

That’s usually how it goes, because we wanted the vocal arrangements to be very specific. The way they go back and forth. We wanted it to feel like one thing even though it’s two people singing. The word choices are very specific too, to make sure it works with the rhythms.

How do you make it work?

They have to fit within the topic of the songs. Sometimes we’ll look up words, and use Thesaurus for instance. The songs still have an intense meaning for us even though the word choice is based more on the arrangements. It’s about finding the best of both worlds.

The song ‘Golden Gal’ starts with a fragment from the classic series The Golden Girls! You hear Dorothy say something about how it’s upsetting that they keep changing the taste of Coke.

A lot of what we’re trying to do kind of plays with pop music, changing pop music, having something like that, using that in an intense way.

In that it’s emotional. It has meaning in the song. It’s not just a random thing. We have references to Dada. It’s that kind of thing. 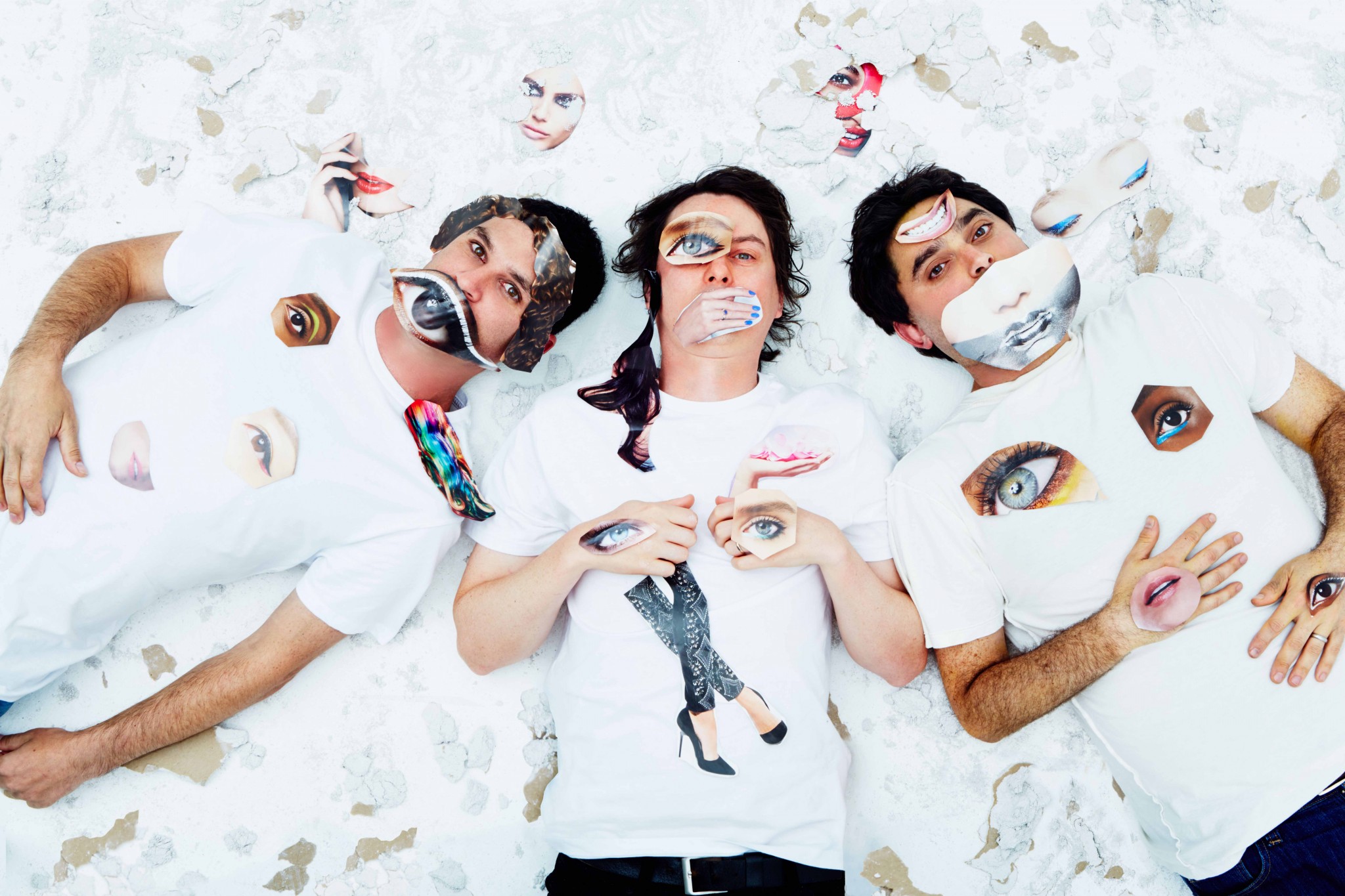 My grandpa is from Kiev. Politically there’s a lot going on in that part of the world. That’s interesting to me and how I relate to all that.

I come from a baker’s family. I eat um.

I immediately played with those dots.

It’s an inviting aspect, there’s a togetherness we wanted to convey. I think the world is pretty global. We wanted to create a record that was sort of universal and sort felt genderless almost. There isn’t a lot of he/she talk.

There isn’t a lot of ‘I’ talk either.

No, it could be coming from the perspective from anyone.

I do. I use more water colours and I make collages. I have a lot of friends who paint. My sister paints. I’m being influenced by painting.

We’re doing it now for so long, we know what we’re looking for. It’s still a challenge sometimes.

I read you also play the autoharp.

Not on this record. It’s actually one of my favorite instruments. On the record we used something similar to a hammer dulcimer, I’m really into Persian folk music. We used a Persian hammer dulcimer in a song towards the end. I can’t remember which song right now.

When you talk Persian folk music I wonder: how is nature involved in your music?

The flow of nature is in there. Nature always has been involved, maybe it’s not so much talked about, but philosophically and personally.. Just being able to accept change, being open to the fact that there isn’t one way of hearing a song, it’s more subjective, it’s not objective.

When making music or songs do you ask yourself the question what does this need?

Yeah, definitely. Especially when it comes down to us all being involved. What do we each think this needs not just what do I necessarily want to do. Often you just want to put something in there. If you’re too personal about it then it doesn’t work. When you hear it back you often go: why isn’t this working? You hear it doesn’t work. At this point for us too. We’re doing it now for so long, we know what we’re looking for. It’s still a challenge sometimes.

We feel real fortunate that we’re able to be still interested and still being around each other and play music together.

Animal Collective’s tenth studio album, Painting With, is out today, 19 February on Domino.