Every generation has its vanguard, its cultural front runners seemingly fated to bring about waves of paradigm shifts, conceptual advancements and, you know, generally mind-blowing tunes. At the forefront of the current crop is Daniel Lopatin, the artist best known as Oneohtrix Point Never, forging ahead into entirely unprecedented musical territory and, arguably more impressively, remaining exceptionally laidback throughout. Imbued with a seemingly boundless frame of reference, he’s equally adept with humorous, off-the-cuff live-tweet sprees as he is dispensing academically rigorous musical and societal analysis.

That is to say, his is a truly unique perspective. When rolling out his new full-length, Garden Of Delete, he disseminated the MIDI files making up the album and created both a fictional ‘hyper-grunge’ band and a grotesque, pus-oozing teenage alien companion. This would be indulgent and gratuitous in almost anyone else’s hands; not so with Lopatin, whose impeccable musical track record and astounding compositional prowess afford him a justifiable level of credit. We talked about reaping the benefits of subjective interpretation, non-musical influences and opportune sugar daddies. As for the dimension of Lopatin’s music that remains stubbornly beyond articulation, we asked artist Max de Waard to address it in a series of digital illustrations. Feast your eyes. 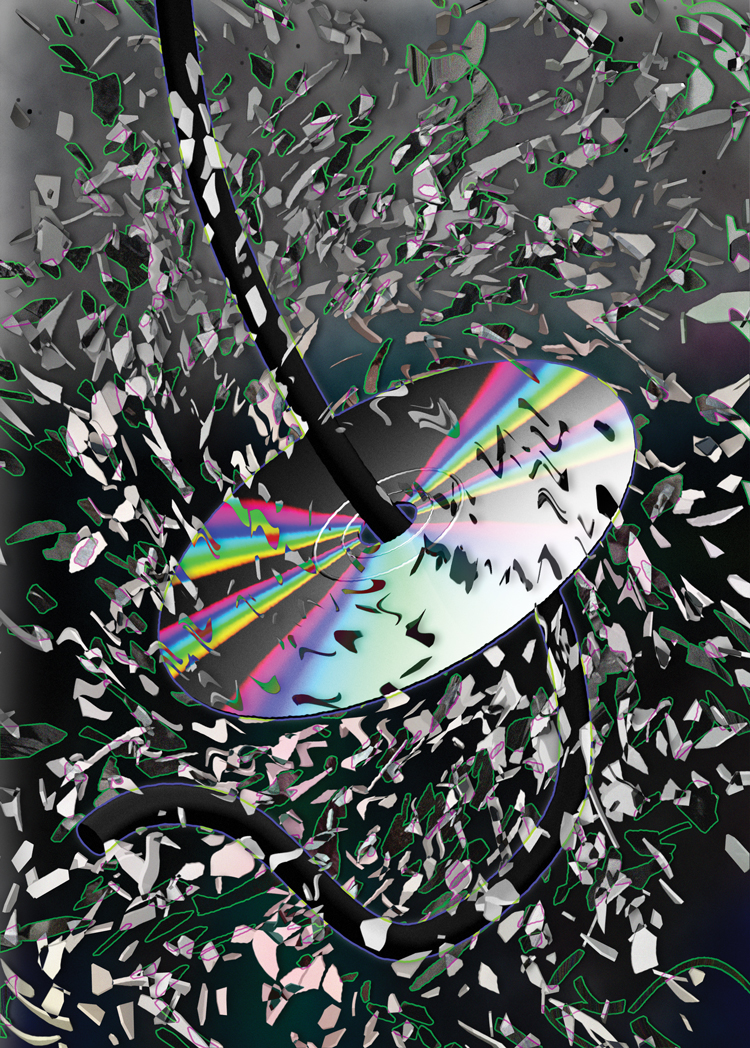 So: Garden Of Delete, a harmonious ecosystem of the discarded? That’s sort of what comes to mind for me; it’s a phrase ripe for subjective interpretation.
That’s true. Also [the notion that] one’s negative thoughts don’t have to be thought of as waste, that positive things can flow from negative environments. But I like the phrase as it mostly strikes me as a paradox, or some kind of immanent space that you couldn’t really describe easily.

On the other hand, the song “I Bite Through It” has a chunkiness to it. For whatever reason, the track really lives up to its title. Why the mastication fixation?

I just like to look at other people at restaurants, like all around me and try to picture the sounds of everything happening in their mouths amplified in concert with one another. It’s just perverse. Fangs and saliva and food textures. I get a huge kick out of it. People dress up nicely to sit around and bite stuff.

I love the human voice above all other musical instruments

You tend to create these worlds or ecologies around each release, like an overarching discourse, providing something of a context.How big a role do non-musical factors play for you in constructing an album?

I don’t know how big a role but I do feel like I might be “doing research” when I make a record and that is definitely a way of pulling in all kinds of extra-musical ideas… However, for me the point of all of this is that there’s no difference between these types of materials; to me they are all the same in some sense.

Still Ezra – the fictional Garden Of Delete protagonist – kind of stands out. He sounds like a chill-ass homie. I was sad to hear he bailed.Why’d he go and do that?

Yeah, he is. He bailed because he didn’t want get me sick. He has this unfortunate affliction, which is that Earthlings who get exposed to him go through puberty ad nauseam until their bodies just can’t handle it any more and die. So he kinda just hit the road, you know, to save me. But he’s still on the internet trolling me all the time so it’s kind of confusing.

As long as it doesn’t get in the way of commissions and residency offers, you shouldn’t have any problems. Speaking of, what other factors come into play when potential benefactors reach out to you? Any tips on getting a sugar parent of my own?

I wish I could tell you. I think I just constantly ask myself if I can picture an idea or some kind of personal idiosyncratic exploit or challenge coming out of whatever scenario is presented; that keeps me from discarding most of these concepts from the get-go. But if there’s some way where I can figure myself into it on a purely hedonistic level, like I’m going to get pleasure in X, Y and Z ways, then my curiosity is piqued. 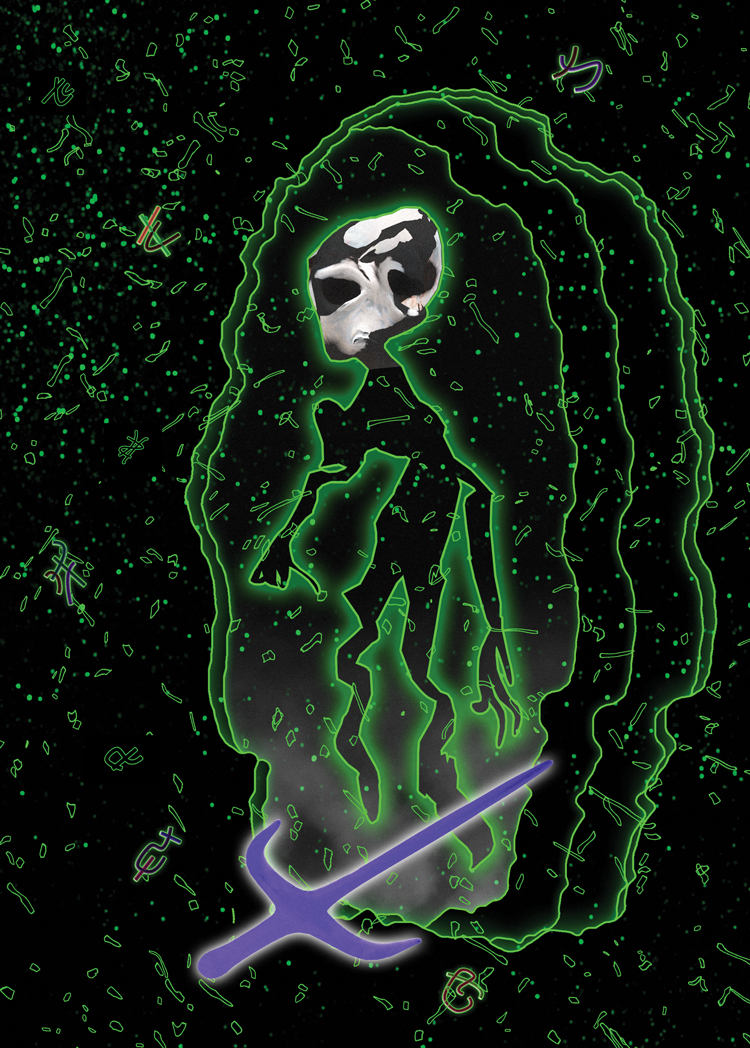 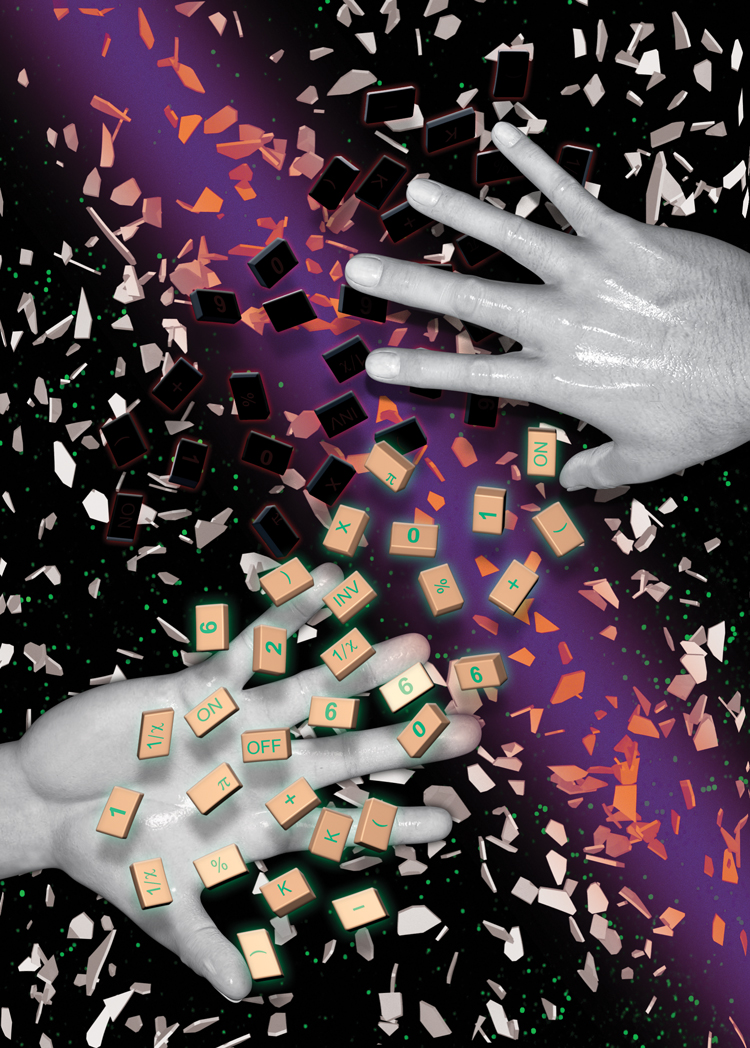 Whose hypothetical artistic sponsorship do you most covet?

In general, I covet singers because I love the human voice above all other musical instruments, but I don’t have anyone specific.

When commissioned, do you maintain complete creative control?

It’s typically been scenarios where the only parameter set is a theme, the rest is up to me and how I want to work.

You’ve spoken before about taking influence from sources other than music – the paranormal, the corporate. I find the latter influence to be particularly interesting in the context of your work. What draws you to the corporate environment?

The tenor of it is enhanced for those that work on a corporate campus every day, for example, but you don’t have to [in order] to feel its absurdity permeating everything. Its symbology, its look and feel, the undercurrent of desire and control that is presented; all of it is totally real and palpable on a daily basis. So being inspired by it is inevitable.

Authenticity never struck me as the gold standard for anything good

You also often mention sculpture. I’m a philistine sculpture-wise, can you point me in the right direction?

Personally, I love mid-20th century abstract sculpture, stuff like Anthony Caro, Tony Smith, David Smith, Isamu Noguchi, and all the greats like that. But I like more contemporary stuff like Charles Ray and recently I have been interested in Ron Nagel’s stuff, which is very small in scale compared to the stuff I’m mentioning. Nate Boyce, of course, and I like Frank Benson’s sculpture of Juliana Huxtable at the most recent New Museum Trienniale – that was amazing. What I love about abstract sculpture is how it can suggest to us, through form, organisms that we don’t yet understand or can’t recognise as such. What types of impossible creatures might inhabit the space of an abstract sculpture? Beyond that, the forms are inevitably so musical for me, it’s endless inspiration. 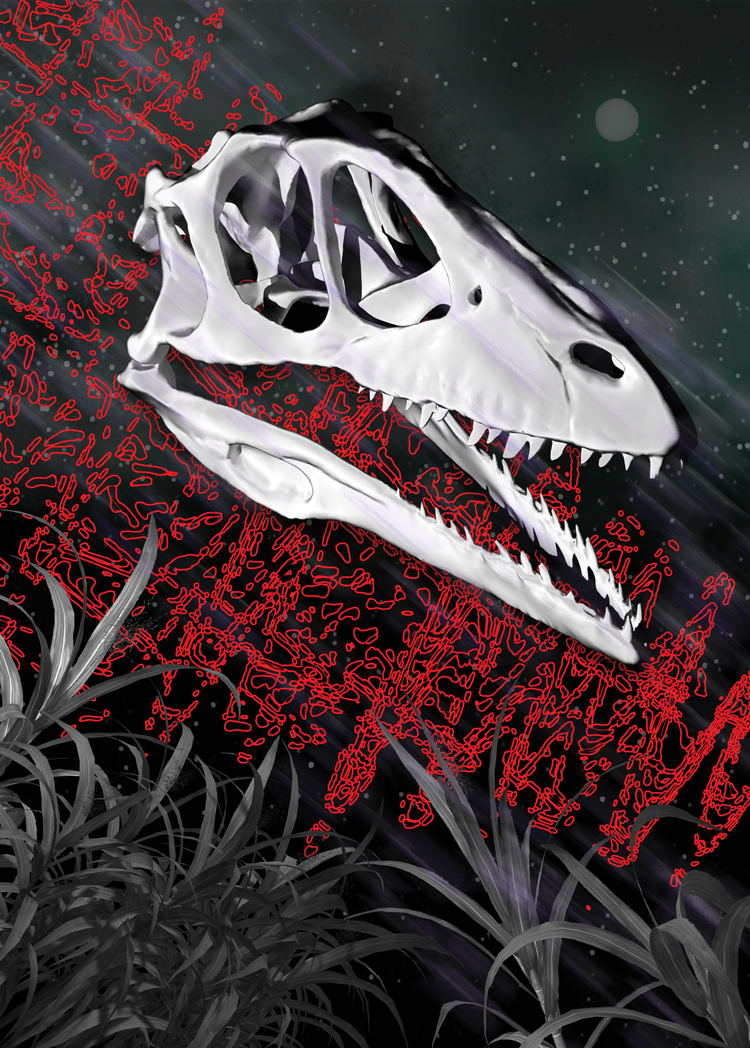 Returning to music, what inspires you when selecting artists for your label, Software Recordings? What do you look for in a Software artist?

Hard to say. It’s kind of an ineffable feeling I get from an artist where I feel like they’re showing me something really personal through music, that’s important. And just the kind of addictive quotient is important as well. I want to be infatuated. To paraphrase something I heard in the documentary about Pentagram – music is a powerful drug too.

There’s many readings of many things, but balance is optimal

You collaborated fairly recently with A.G. Cook. What do you make of the recent near-backlash over the supposed “insincerity” of PC Music and their tunes?

In the age of transparency, it’s desirable to reveal who you “really” are, which is, ultimately, just another performance to me. So authenticity never struck me as the gold standard for anything good. I just like the way Alex writes songs. A lot. I like his chords. And the way his melodic ideas come together. They make the hairs on my arm stand up. He’s exactly who he wants to be, which is as sincere as anything.

Right, I find it unfortunate to see a point where the aesthetic interpretation of music’s conceptual basis overpowers its discussion at face value. Do you ever have that sense with your own tunes?

“Aesthetic” is an easy way to talk about anything, and allows people to cross-commit to ideas they’re working out. It’s just funny to me. I don’t mind, there’s many readings of many things, but balance is optimal.

Do you ever find yourself annoyed by a particular stance on or interpretation of your own work, regardless of how subjective it is?

It feeds my ego, and then makes me depressed when I realise that I want it fed, and then I reject it. Repeat. 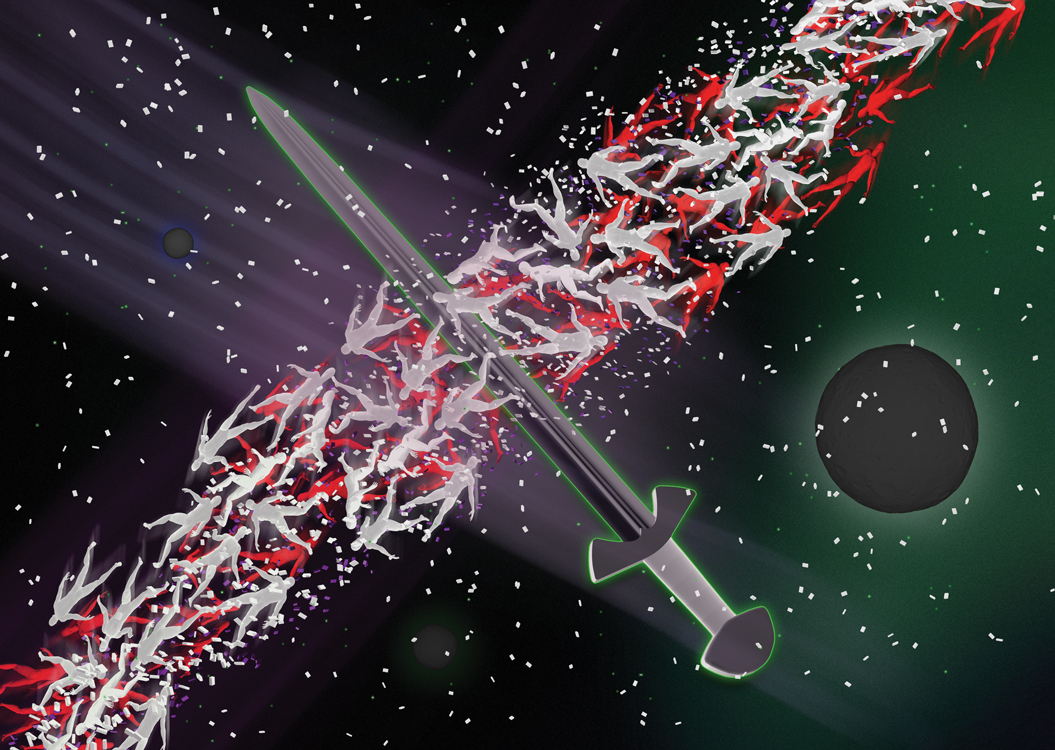 Oneohtrix Point Never will take on Amsterdam’s beautiful concert hall Muziekgebouw aan’t IJ in another night of The Rest Is Noise on February 23rd, 2016. 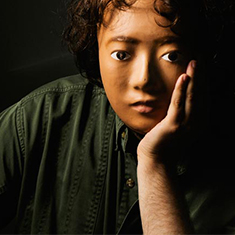 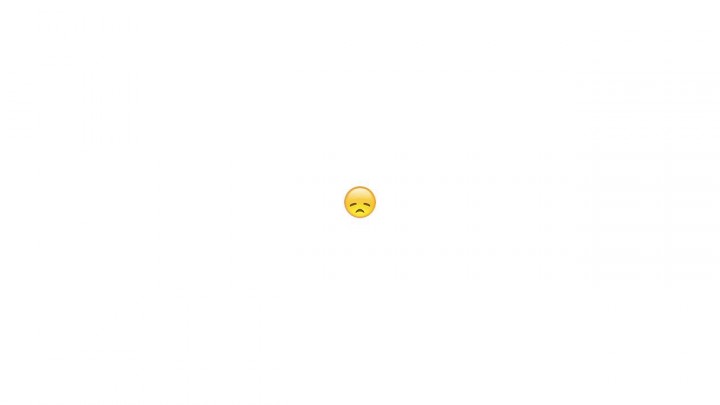 Electronic experimentalist Daniel Lopatin enlists John Michael Boling to visualise the message of "Boring Angel" from his spectacular R Plus 7. 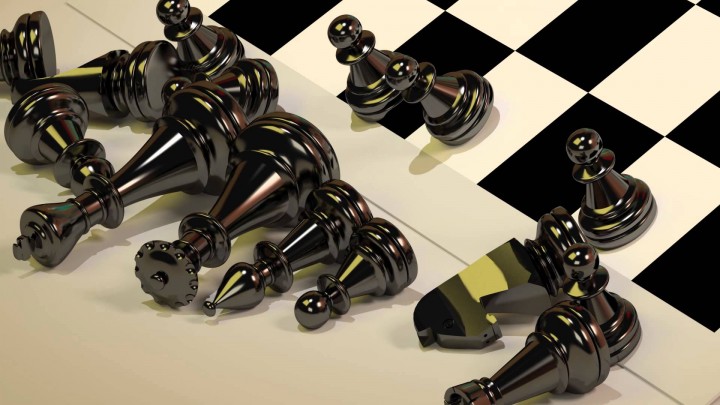 Sure it says directed by Takeshi Murata, but if we didn't know any better we wouldn't be surprised if Daniel