Home of the Homesick

‘Find the most beaten-up car out front Utrecht CS, and it’ll be me,’ Isolde texts me. A dented Ford cracks around the bend and she beams at me, ‘Get in!’ We’re on our way to the depths of Friesland – a 12,500-inhabitant town called Dokkum, home of The Homesick, the fresh-faced three-piece whose unruly disposition and enthralling guitar-pop bangers have gotten us absolutely hooked. They’re also the whizz-kids behind Yuko Yuko and the groundbreaking netlabel Purple Noise Record Club. But first and foremost they’re a Dokkum band. We travel way up north to find out what that means. 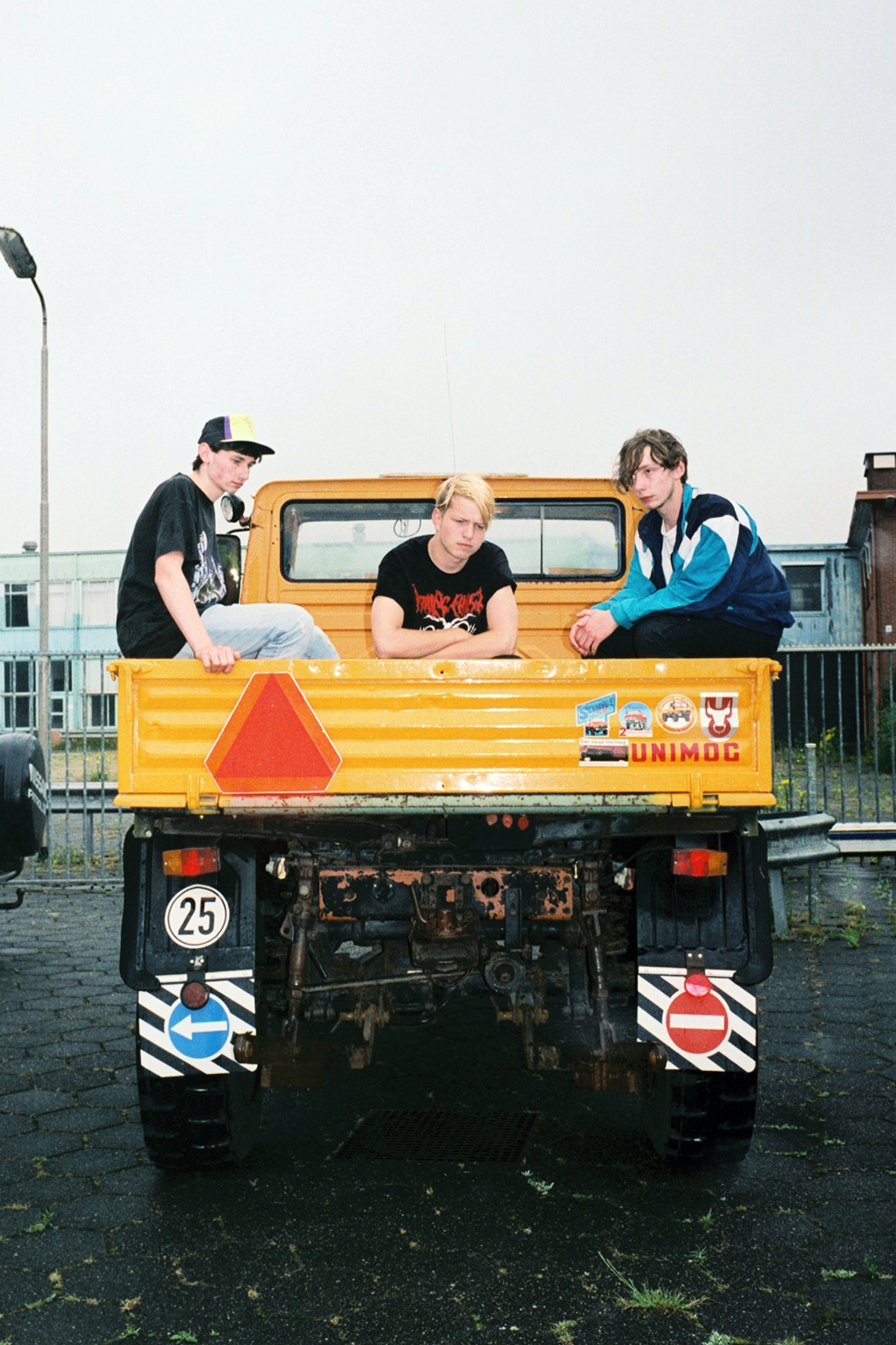 We find Jaap van der Velde (18), Erik Woudwijk (18) and Elias Elgersma (20) eager to show us the sights. Armed with an infectious enthusiasm, the bleached bass player, vocalist and brains of the operation Jaap takes the lead, followed by zany guitarist-slash-vocalist Elias. Erik resonates calmly in the background, both unmistakably present and to himself – a fitting parallel to his place on stage. We head out to pick up our ride, Erik’s unimog – a titanic orange oblong vehicle that maxes out at 80km per hour and has no obvious purpose other than instilling joy in the drummer’s heart. We scramble into the back and make our way to our first attraction – the statue and chapel of St Boniface.

Jaap knows the parochial tale by heart: ‘He was a Roman Catholic missionary. He came here to destroy our Germanic churches and kill its followers. He was stabbed here, through the Bible he held over his head, in 754.’ ‘He was a dick,’ Elias interrupts Jaap’s passionate account. ‘He chopped down all our oak trees and ruined all our Pagan temples. But he left us these healing springs.’ ‘People come here to rub water on themselves, hoping it’ll heal them.’ Erik adds: ‘It comes straight from the gutter.’

As we round the bend to our next highlight, edging towards Holland’s smallest hospital, the epic noise this vehicle is making suddenly becomes especially apparent. It huffs and puffs and bangs. Standing in the drizzle out front of the soon-to-be shut down Sionsberg Hospital, I ask them earnestly whether they’re the biggest thing that has ever happened to Dokkum. A jaunty harmony rings out: ‘Yes’, ‘Yes’, ‘Yes’. 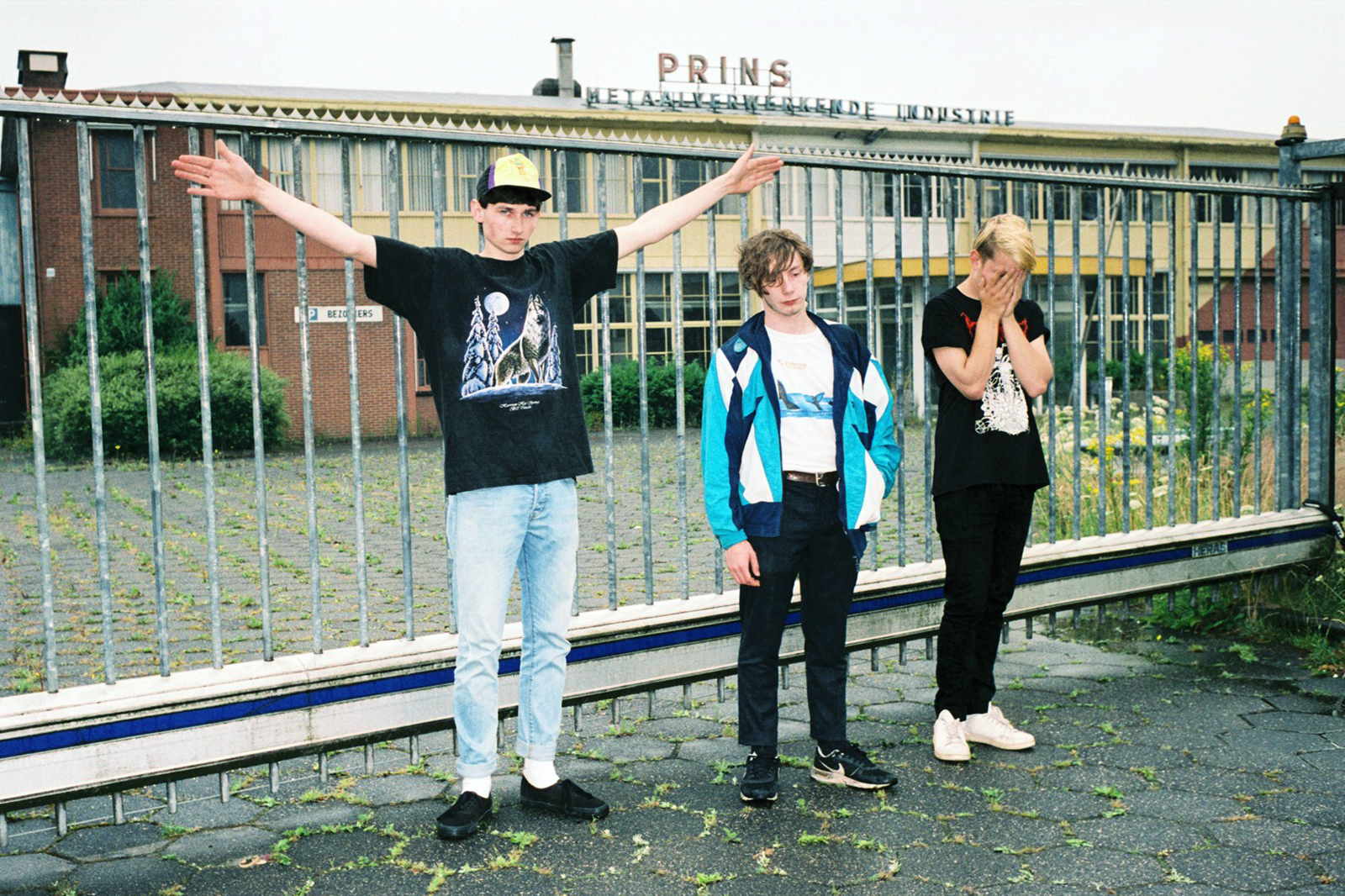 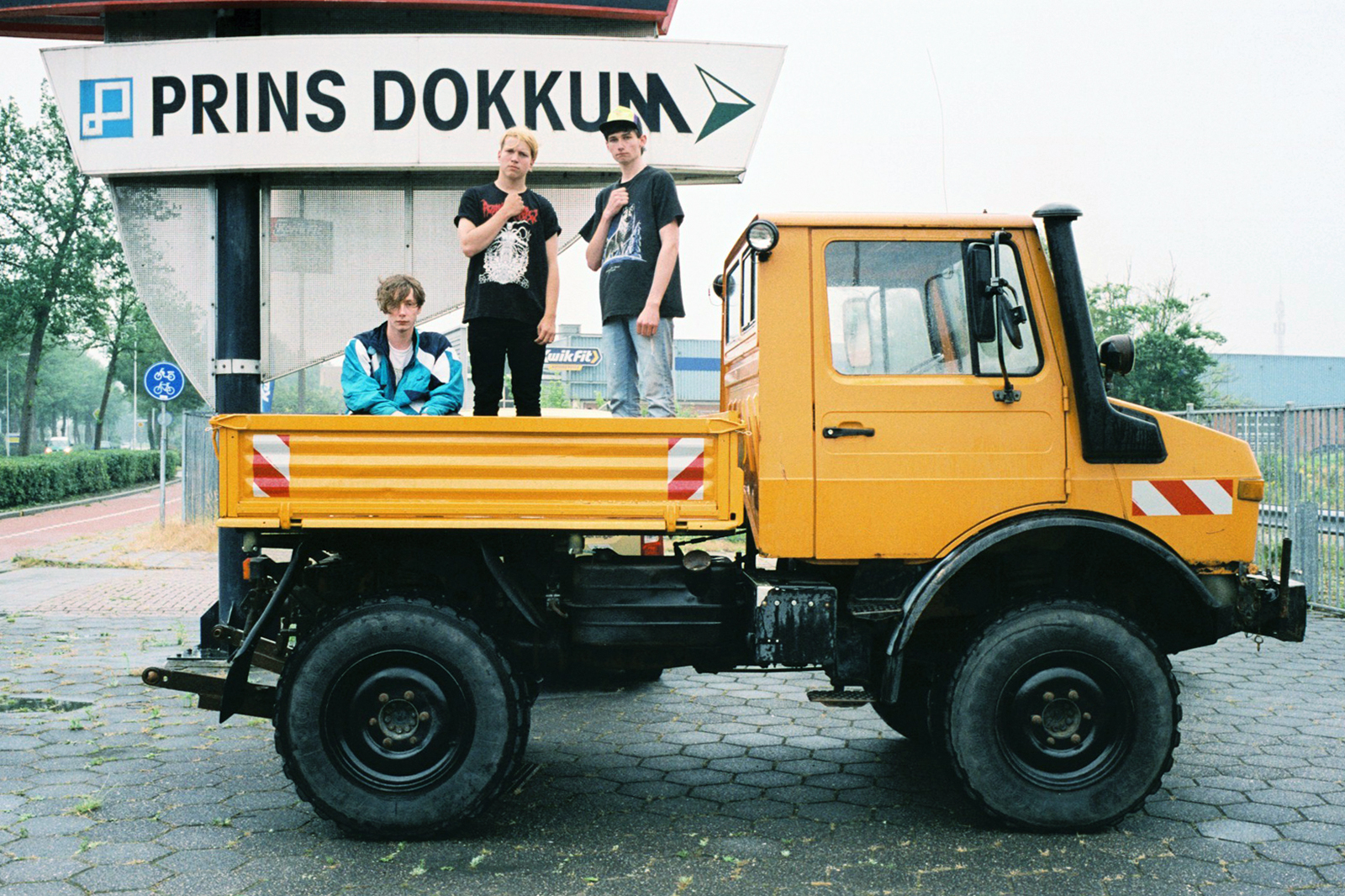 They’re kidding, of course, but it can’t be far from the truth. Their achievements speak volumes beyond the scope of their backdrop and includes their rave EP Twst yr Wrsts (Subroutine Records), being booked for this year’s POPRONDE line-up and receiving inexhaustible acclaim for this January’s Eurosonic show. And they’ve only just got started.

The darkening skies release a sudden downpour, so we run for the cover of the dark bicycle shed in front of the hospital. Thinking we might be here for a while, we take the opportunity to start from the beginning. How did they get into music? ‘Young people don’t experience a lot of live music here, so we discovered things through the Internet,’ Jaap recalls. ‘Once I had enough of the shit on the radio, I started uncovering things like Deerhunter and Sonic Youth. And Elias used to play me tracks over Skype.’ 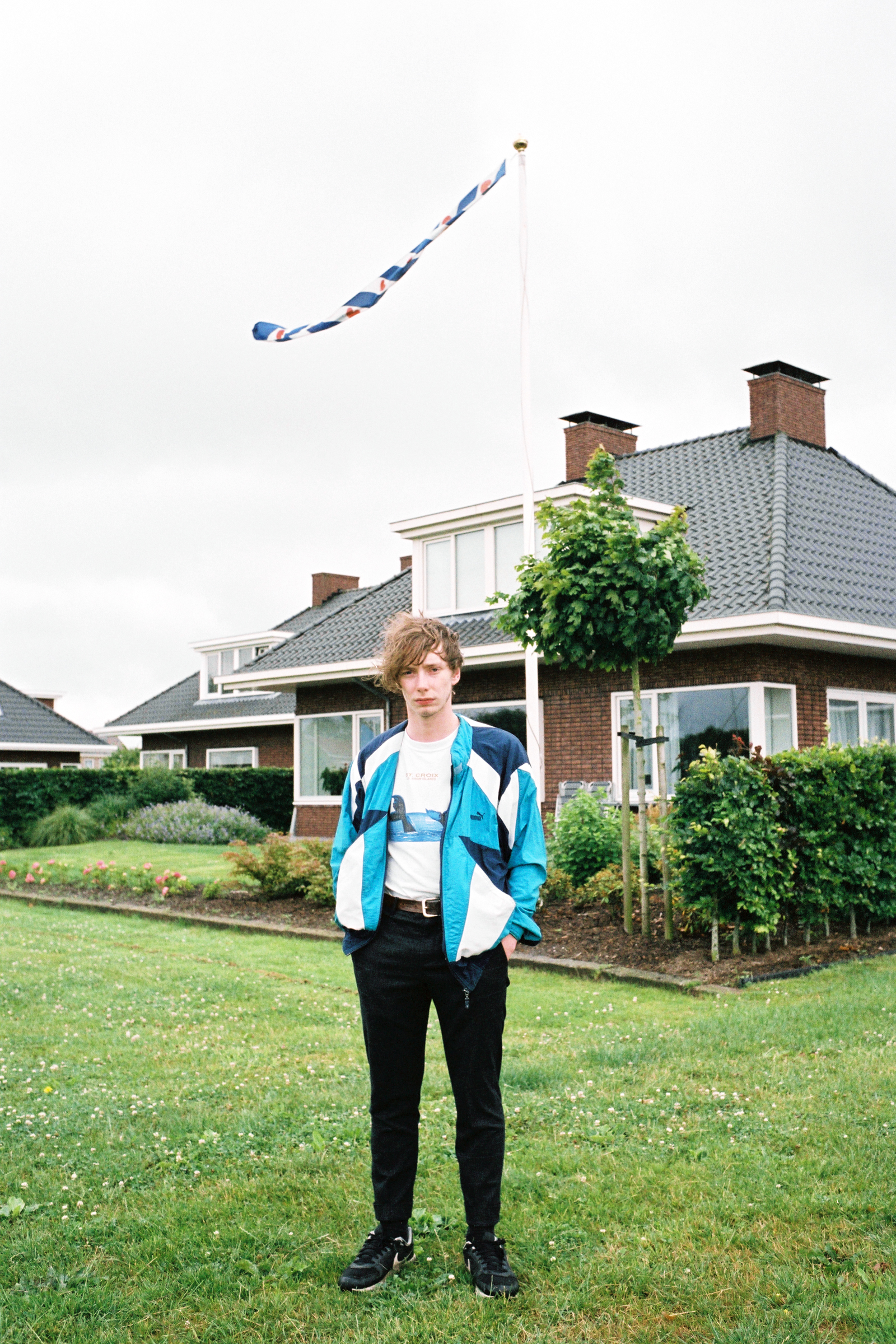 ‘Most people around here don’t really get what we’re doing. They don’t really like our music. They show up to shows because there’s not much going on,’ Erik says, adding that ‘people at my work ask me all the time: “You play quite a lot right? And you get paid to do that?”’ The discord is hilarious to them.

These guys obviously don’t take themselves too seriously, yet at the same time their commitment to music is striking. In their salad days, they not only find themselves at the forefront of the Dutch scene, they’re also blazing a trail with their eclectic lo-fi sound, merging critical postpunk sentiments with sweet dream-pop hooks. In the meantime they find the zest for other musical endeavours too. Surely they must feel isolated in this town? Or is that exactly what determines their unparalleled sound?

‘Listen, Amsterdam is more fun, but I don’t need to live there,’ Elias sets the record straight. ‘I’ve felt misplaced at times, but the thing is, we’re not outsiders here. We’re down-to-earth and no less Friesian than the next guy.’ And they don’t plan on going anywhere: ‘The mentality is good around here,’ says Erik. I ask them if that mentality affects their sound and Jaap calls it: ‘Yeah, ’cause we make good music.’ They all laugh. 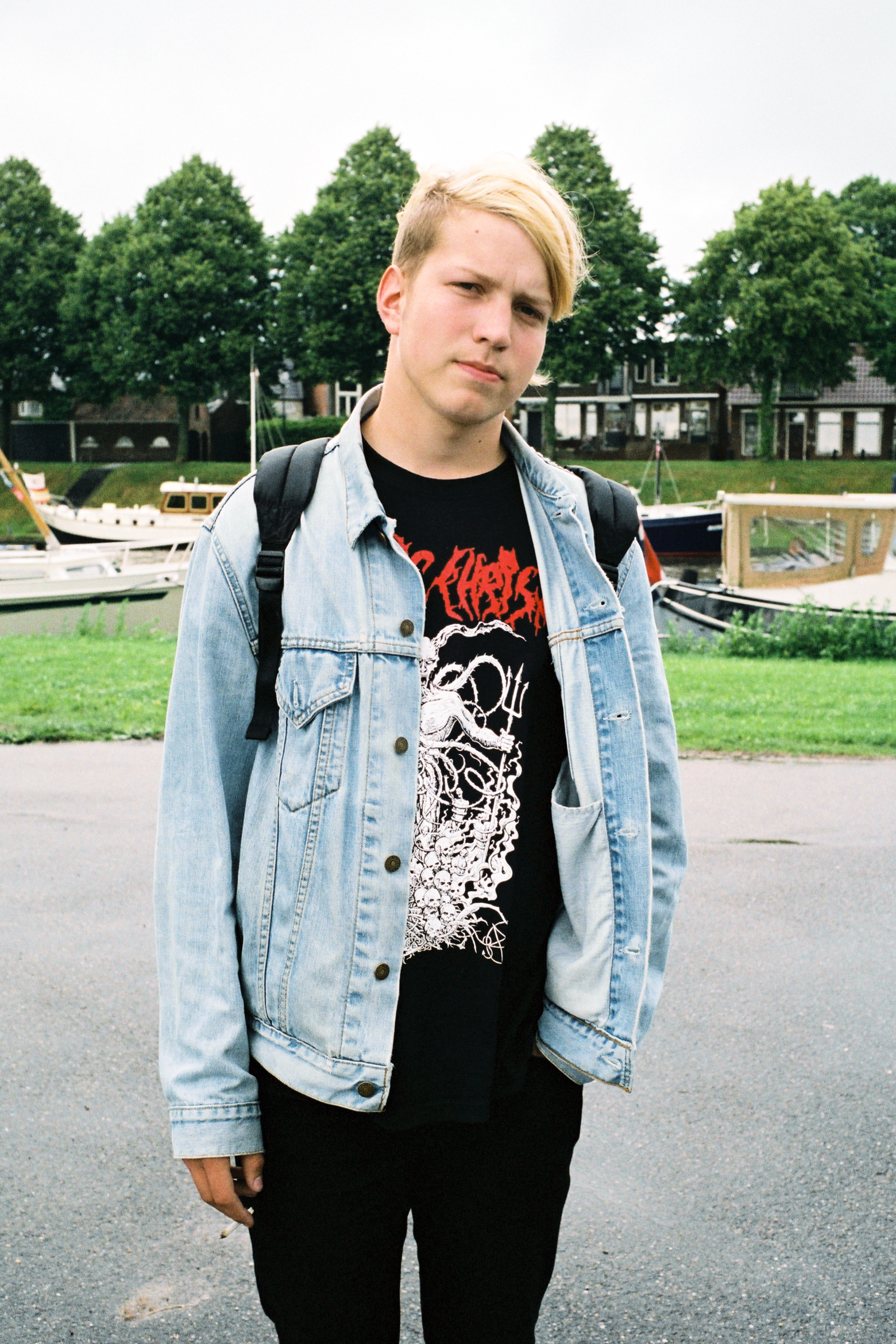 Their love of this place is clear; its humble charm runs through their veins. We draw closer to our final stop, De Lantaren. ‘This is our favourite bar, and there’s a snack bar next to it. So, you can order fries at the bar – no problem!’ Jaap grins. We dive in and take a seat at the bar. ‘We played our first ever show here,’ Erik recounts. ‘There’s a small stage in the back.’ They’ve come a long way since then, now booking shows of their own. They booked Rotterdam’s brash Rats on Rafts here not too long ago after touring together, exults Elias; this sparks a conversation about influences and local bands on the rise. ‘Our taste is pretty diverse. We all like Mac DeMarco or Ariel Pink. Personally, I’m a huge Krautrock fan, things like Can and Nau! whereas Elias is a big beach boy fan—’ ‘I’m into trap,’ nods Elias. 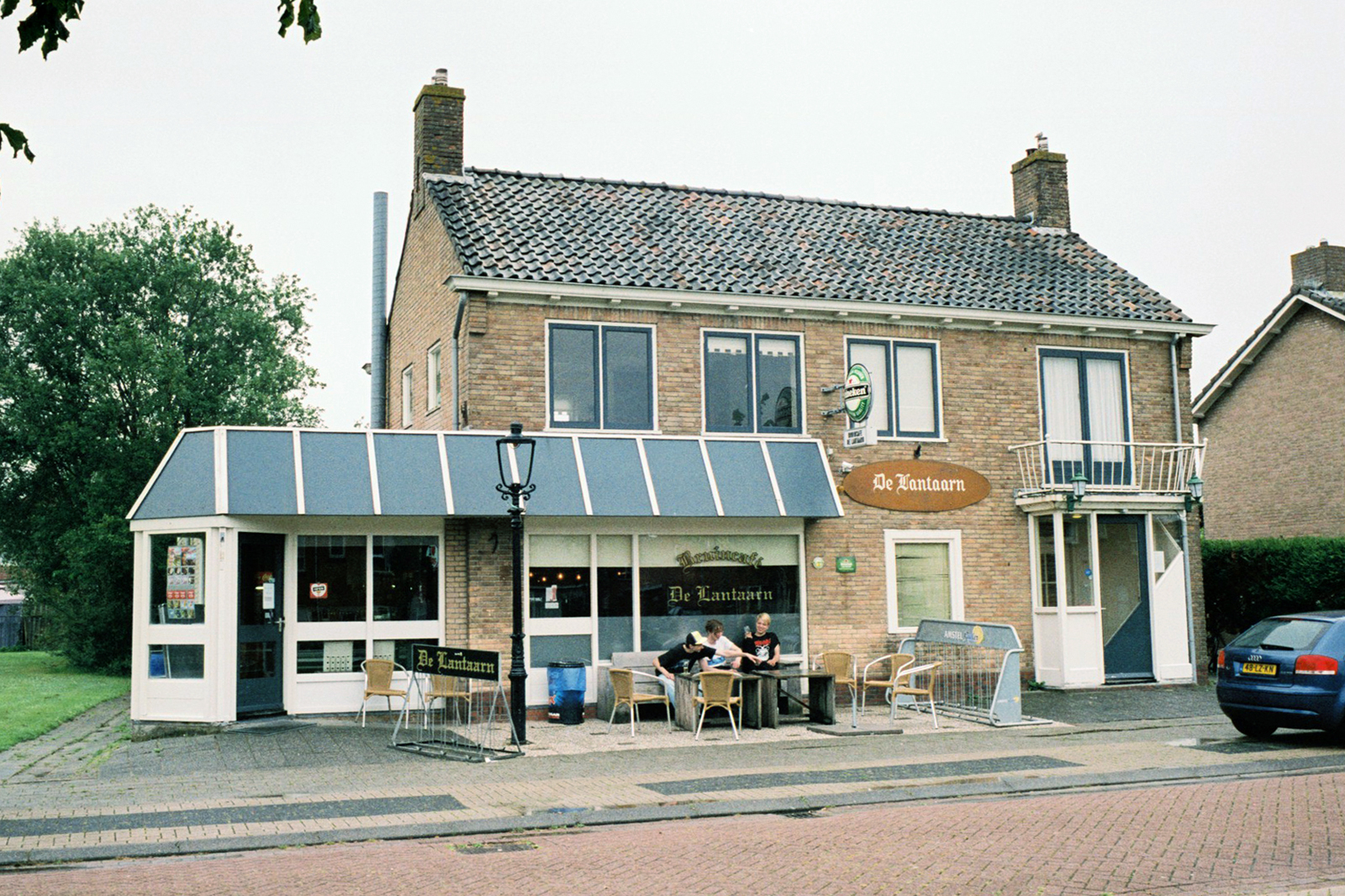 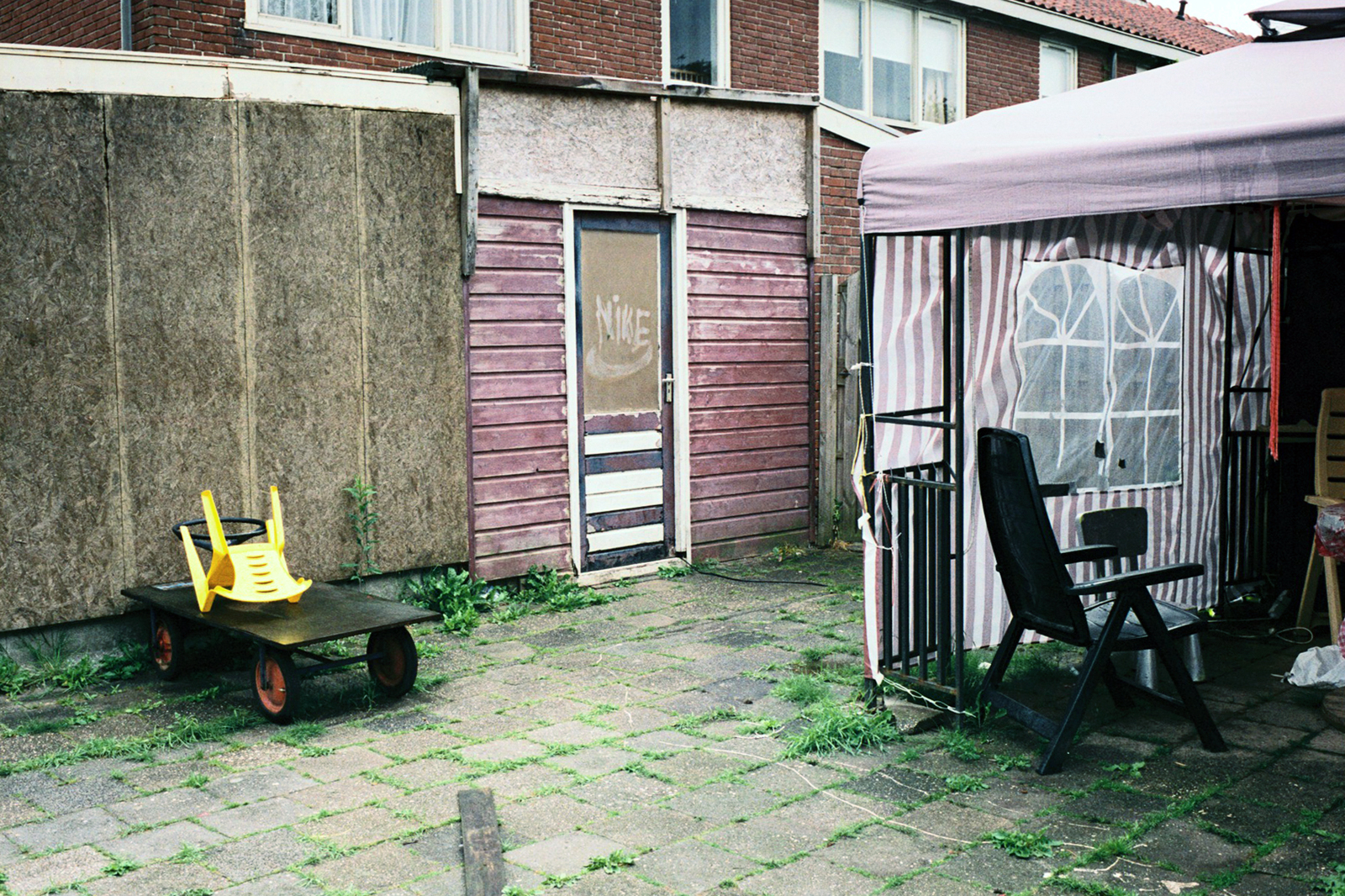 ‘There’s a few small-scale things in Holland that really stand out. Like, take Floris Bates or Boner Petit – oh, and Sante Fé from Groningen.’ Elias continues: ‘One of the most authentic bands in Dutch history; this ’80s post-punk band called It Dockumer Lokaeltsje from Leeuwarden. It’s wild, they sing in Friesian and each song lasts about a minute and a half. They’re definitely the all-time favourite Friesian band… after us that is.’ Again, they laugh. 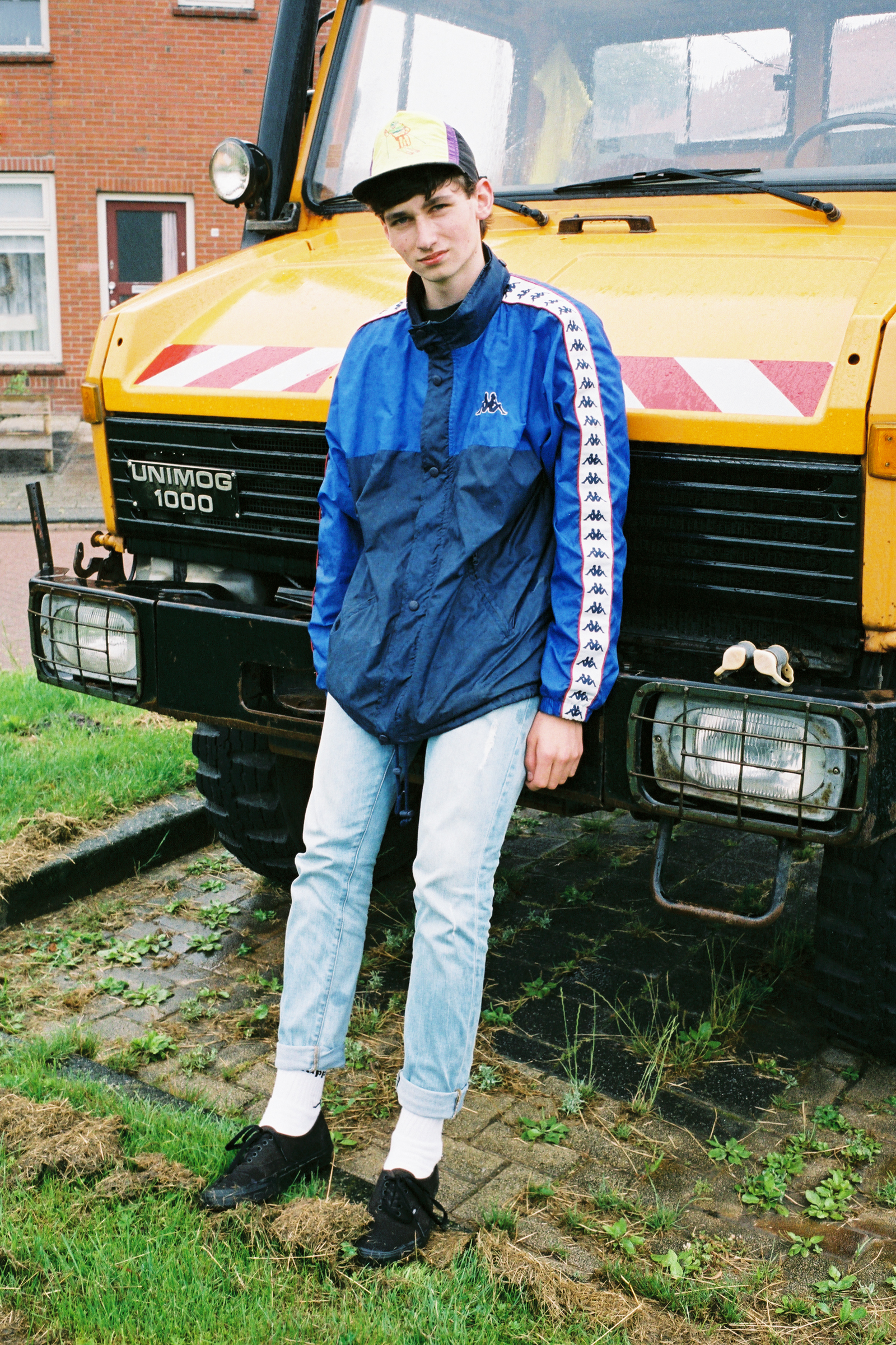 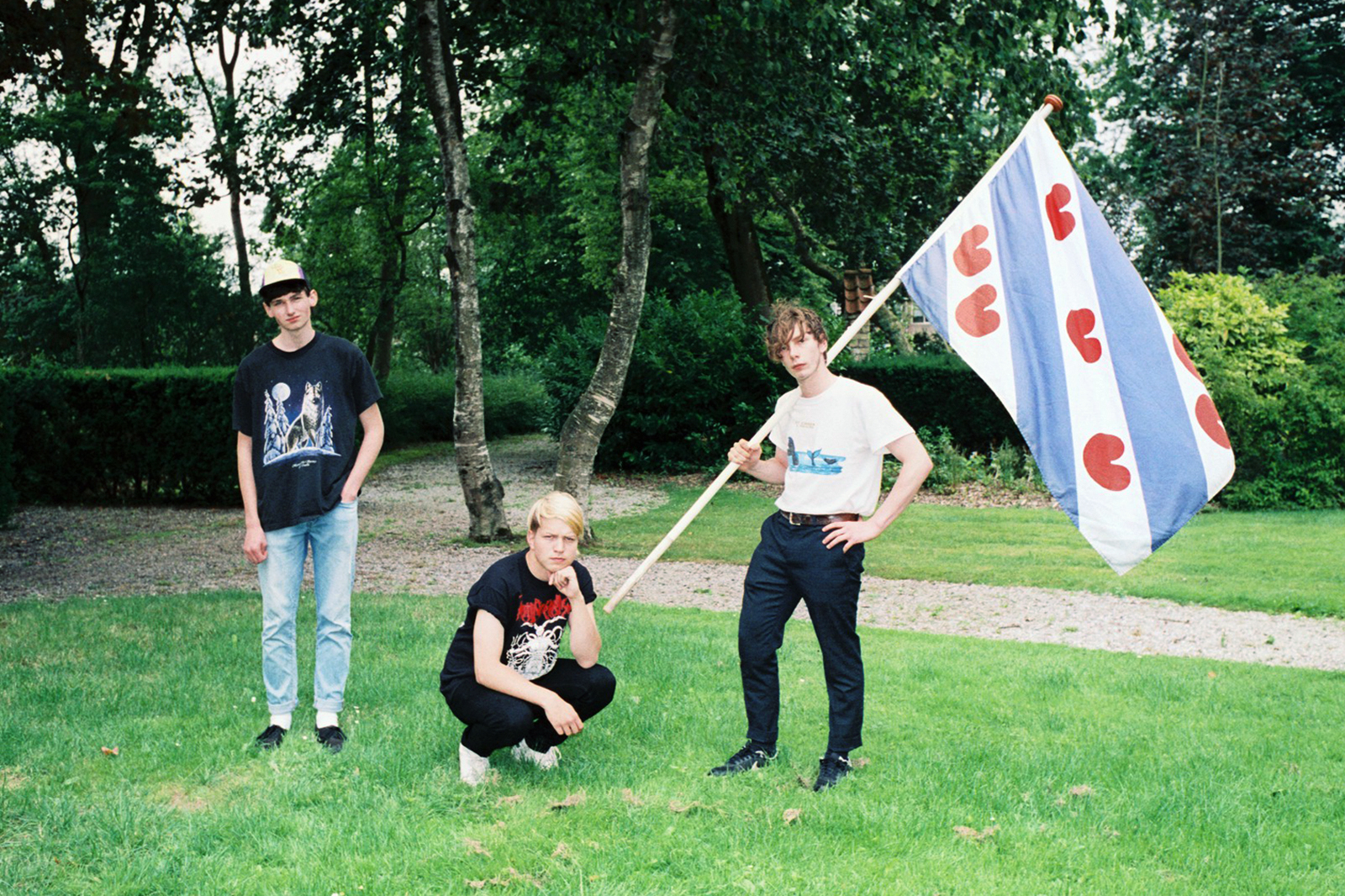 As the day draws to a close, it strikes me: who would’ve thought that from the depths of this small town, you’d find three cool-headed guys delivering a sound with such international appeal. Backed by their drive and confidence, they’re ready to conquer the world, yet they don’t plan on leaving this town.

Just before Isolde and I head back, Jaap steps outside the bar for a second. Elias leans in and boasts in a hushed voice, ‘Look, so they have running tabs at this bar, right? Sometimes, when Jaap is the first to leave, we order beers on his tab. He has no idea!’ Erik and Elias titter away. Little did they know that this would be their unveiling.

The Homesick’s new 7” Stereo Lisa/Boys is out in September. They play at Rotown, Rotterdam on 12 September. 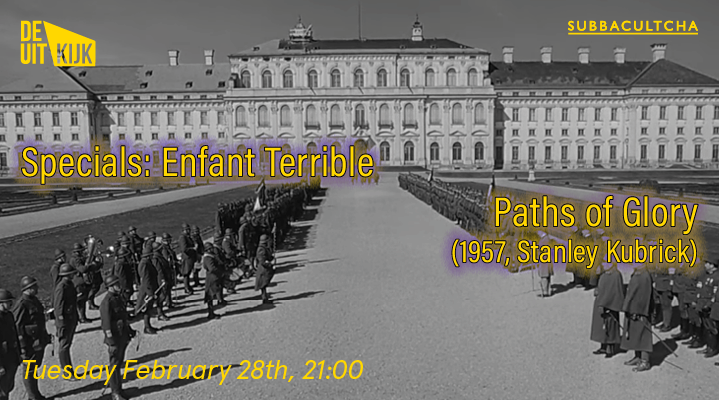