Barcelona born four-piece MOURN have us daydreaming of a parallel universe, one in which we were a jaw-droppingly talented band in high-school touring Europe and kicking ass to the meek envy of our classmates. We blink twice, realize it’s not happening to us, and shout out a warm ‘hola’ to them!

Jazz: You have to skim time out of studying.

Carla: And investing a lot of money. Focusing on a music career is the opposite of cheap; you need to buy plenty of instruments and pedals, renting a recording studio, paying all the transportation…

Jazz: We recorded the record on Christmas 2014, it may sound funny but we had to gather as much money as possible (even from our grandparents) to get to record our debut LP. Getting to buy our own backline equipment so that we don’t have to borrow anything from other bands while playing live has been a great step forward for us.

Antonio: It’s been exhausting to me having to borrow snare drums all the time. It’s expensive and you have to be really careful not to screw other people’s equipment while at the same time being free to play your own way.

Carla: We meant to capture a moment in our debut LP, that’s why we decided to do a live recording. Our live show will have a similar taste, but much stronger. We are also going to play songs from our new EP.

Antonio: Our live shows are us… but more bombastic. It sounds deeper and hits harder. We feel the possibilities of owning our own gear will outstand what the audience expects from us. But still we are pretty friendly.

Antonio: We like to show ourselves open-minded and to get feedback from the public. If anyone feels like approaching us and having a talk we would be more than delighted! We don’t mean to have a vertical relationship with the people listening to us and coming to our shows. This is not ‘thank us’ for our music; it’s a ‘thank you’ for listening to us.

Jazz: We find that people in Barcelona are a bit shy, we always end up begging the audience to get closer to us. We love the feeling of closeness with our audience.

Jazz: We are good kids! We would not kill anyone… We don’t mean to gain any enemies! This is a complicated one… If I have to speak about a band that kind of let me down, I’d go for The Drums. I went to one of their shows really excited to then realize they were not even putting any attention to do it right.

Antonio: No pun intended, but sometimes I got the feeling there are a lot of unnecessary bands in the scene. Uncreative and plain shouldn’t be so common nowadays.

Carla: I think it has a strong impact on your friends. When we started having concerts or practices almost every day, your friends start resenting your continued absence. They are still your friends, but it’s just hard to keep up with them like you used to do.

Antonio: We were aware of what we were doing from the very beginning. Embracing this lifestyle is complicated but rewarding; you know you are going to sacrifice to a certain extent a part of yourself in order to go further. Moving forward and pushing our boundaries is extremely important for us; and even though it’s painful you are going to push away whatever holds you back.

Jazz: Actually we got the feeling there’s more interest for our music out there than here in Spain.

Carla: It is. Specially because Barcelona may seem a nice meeting point for a lot of bands, but eventually most of the bands are spread all over Catalonia.

Jazz: There’s something on the way, but right now it feels like a pretty individualistic scene where different bands are covering different styles.

Jazz: It did! Unlikely, but it did. Being bored to death in a place we didn’t appreciate was a great drive to start composing songs. Instead of getting suicidal, we decided that starting MOURN would be a great way of overcoming that angst.

Carla: Our classmates were not supportive at all. Most of them just looked down at us assuming we wouldn’t make it. Now that things are getting serious some would be like: ‘wow, now you are going to tour Europe’.

All together: Yes, we are.

MOURN are making their Amsterdam debut on 17 January at De Nieuwe Anita. The show is free for Subbacultcha! members. 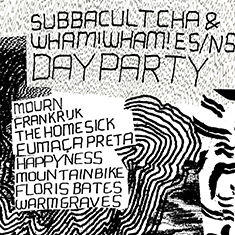 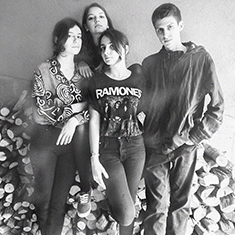 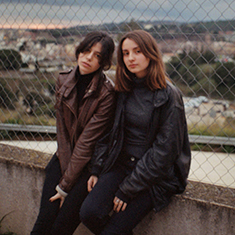 With each newly released MOURN track, we are utterly confounded. Barely out of high school or old enough to recall

'Deliver me from Heaven' never sounded this threatening before. Spanish younger-than-young band Mourn just signed to Captured Tracks and released