Nothing is forever – not even Dirty Beaches. When Alex Zhang Hungtai recently decided to end his musical project after almost a decade of his life, we thought, who better to talk to about killing your darlings then with the crooning romantic? His latest, Stateless, is an instrumental piece about beginnings and endings. Don’t worry: he’ll continue making music, but with a different outlook on life.

Some decisions are hard to make, others are easier and some are made for you. How was it for you?

The thing is it feels good to let go and have the strength to move on. The ending of Dirty Beaches for me is more a symbolic thing than a creative thing, it’s more about not wanting to repeat what I’ve been doing with my life.

Was there a certain facet of DB that didn’t sit well with you anymore?

It’s just that I’m not 24 anymore, I’m 34. I think age has a lot to do with it. If I was still 24 I would do it for another ten years, but yeah… It makes me stronger in a lot of ways, because you don’t force yourself to do things you don’t want to do out of insecurity.

It happened slowly, but the decision was an overnight thing. It felt intuitively right to end it. It’s okay, it’s for myself, it doesn’t involve other people.

Did you bounce your plan off other people?

Were there moments where you woke up in a sweat thinking, I must be crazy?

It was, like, four or five in the morning in Lisbon at the time, where we’re still doing a residency, and we’d just got back from a tour in Japan and I just decided. We’ve been living here in Lisbon since January, I’m ready to move.

Where will you go?

I’m not sure yet, but I’m definitely going back to North America. I just miss my car. I want to walk into a café and be able to communicate with people and express myself. ‘Yes, I’d like a cappuccino.’ After two years of struggling with language in Europe I’m ready to go home.

There’s this saying to not throw away your old shoes before you’ve got new ones.

I think I’m the kind of guy who throws away the old shoes before getting new ones.

Are you sentimental about it?

You’ve played and toured as Dirty Beaches for almost ten years of your life.

It’s gonna continue just in a different way. I’m looking forward to finding a new way to live my life, not living in hotels and in strange women’s houses.

Are you saying that the search is over?

I think that’s never over, but your perspective changes. When you achieve the dreams you had at age 18 when you’re 28, by that time you want different things. When you’re 34 and you achieve the things you wanted when you were 28, you’re looking at something else now.

And now you’ll continue your musical search as The Last Lizard. Do you think once a loner, always a loner?

I think that’s the unfortunate reality there. I don’t want to be, but I’ve been let down so many times, that it’s been proven that I’ll always be a loner.

Being alone is a place of refuge?

That makes sense. When you’re left with your own thoughts, it’s not an easy thing to do, to look in the mirror. A lot of people choose to not do that, because it makes them sad to think about things they don’t want to think about. In reality, it makes you a better person if you can accept certain faults, and see them. Accepting is the first step. I’m trying to accept that I can be a horrible person at times.

No one’s perfect. It’s very vague and narrow. I think the thing I’m bored with now is the new generation’s sense of cheesiness, where everything’s a joke. I think it’s very funny, because their life is a joke. They don’t take anything seriously because they don’t want to be rejected and criticised. Maybe there’s some sense of merit, but personally I don’t care about getting hurt; if anything, it helps you grow. When you’re afraid of leaving, you never ever end up learning anything.

I’m imagining a learning curve in your discography, from heavy emotions to a grander feeling, maybe?

This one is more about letting go, accepting that. Happiness comes after. Everyone is always looking for an instant answer, but it won’t come until certain things are taken care of first.

Those ‘weak’ spots are sometimes a real pain in the ass.

Of course, that’s why some people refuse to reject it.

Are you in the mood for love now?

I once met this girl and she told me, ‘You’re not capable of loving someone else unless you love yourself.’ At the time I was like, ‘WTF?’ I remember I just looked at her. It sounded so cheesy, but you know, I think it’s really true. I’m ready to accept that. If it comes, I’m ready, I wouldn’t reject it.

There are absolutely no words on ‘Stateless’.

I don’t think words are necessary sometimes. There’s people that I’ve met in the last two years in Europe, whom I’ve understood more without ever talking to them. Like, I’d rather give someone a coffee than ask them anything, then it can become this long… what are you trying to say?

The sounds of silence.

It’s not ideal for business, that’s for sure. Imagine business meeting where no one talks.

Meeting adjourned, that’s easy. So, is the album a guide to how to disappear completely?

I wouldn’t take it that far. It’s a positive new horizon. Some people think it’s very negative, some think it’s uplifting. For myself, when I listen to it, it makes me sad, but after, it makes me feel better. I didn’t want to think too much about surface, appearance and aesthetics, it’s more about the inner world.

And then the others don’t seem to matter so much anymore?

There’s a great sense of relief after that.

Imagine you had all the luck in the world and all the will power at hand. What would be your goal from now on?

I wanna be the kind of person that never doubts himself and just have good faith and I think through that your world is constructed and things will be affected and everything you say and do affects that.

Do you know any jokes?

What do gay horses eat?

How will I ever get that properly translated on to paper?

Alex Zhang Hungtai his last record as Dirty Beaches, ‘Stateless’, earlier this month. He’ll be releasing new material as The Last Lizard from now on. 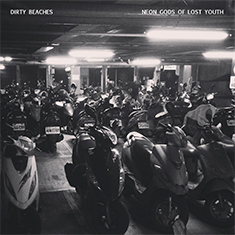 Dirty Beaches drones on from last year's double album Drifters/Love is the Devil with Neon Gods of Lost Youth, a collection of

Despite being on the road for months, Dirty Beaches have found a little spare time here and there to put 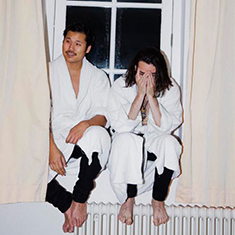 Dirty Beaches – Drifters/Love Is The Devil

In Drifters and its moody, mostly instrumental counterpart Love is the Devil, Alex Hungtai channels all that loneliness and desire for catharsis to reveal