I find photographer Isolde and Karel on the corner of Dam Square, high in spirits and ready to kick-off our day in Amsterdam. Karel, local solo-performer with an enthusiasm that’s hard to contain, is dressed in jeans and an Umbro sweater in a darker shade of blue, his blond hair freshly cut; ‘I wore my best today,’ he smiles. His recent move down from Groningen broke the ice to an unexpected solo career; for a little over a year, he’s been a regular performer at underground locations around the city, while keeping up his day job as a food technician. Singing along to a backing track, Karel’s energy-filled one-man shows are the kind to delight in, while feeling slightly afraid he might hurt himself climbing up whatever happens to be within reach. In the past, our field trips have taken us to artists outside Amsterdam, but as Karel’s found his way to us, we’re doing it a little different this time – a touristy tour of the city. 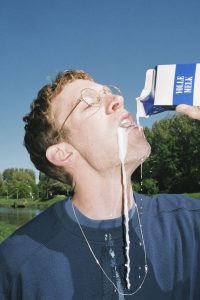 From the moment we meet, Karel’s positive energy complements the sunlit day. I stay on bike guard while Isolde and Karel head over to flocks of pigeons in the Dam Square with ‘popular pigeon food’ (the bag actually reads that). Just like on stage, Karel has no reservations basking in the limelight – pigeons rest on his extended arms, he lays in the thick of them and they eat out of his cupped hands. He’s made himself comfortable, ‘I do see what I do sometimes. Even with friends, when I’m not getting enough attention, I do something weird just to get it. My friends say it too, “Oh Karel wants attention.”’ He laughs off the self-reflection, but what are the moments when downtime comes into play? ‘I need to socially recharge. I get so excited when people are around, but it takes a lot of energy too. So I always need a few days totally on my own – that’s when I make music… I can’t be around anyone. Until that tension builds up again and I want to go out to see people again.’ 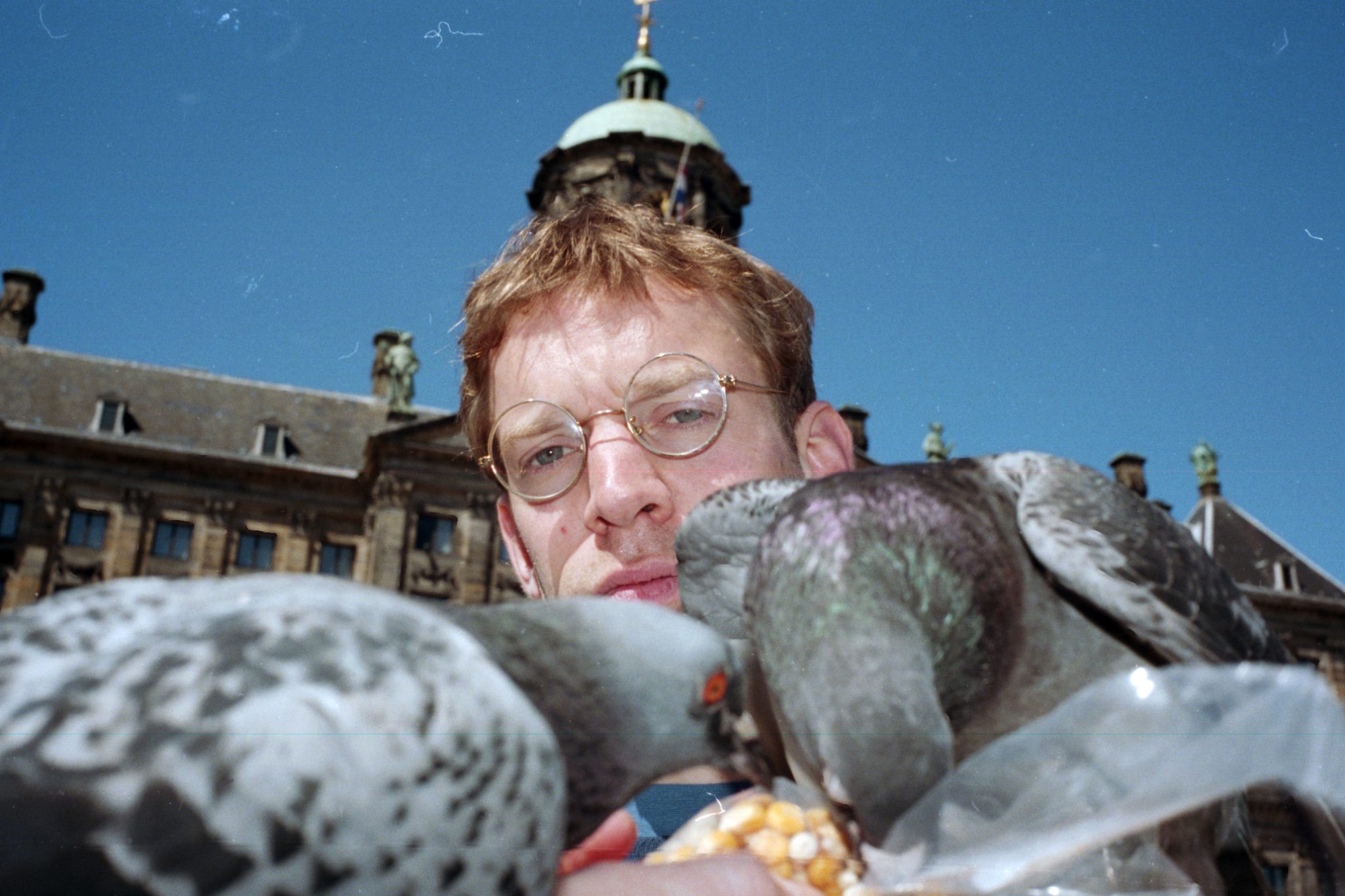 Our journey continues. Changing scenery to Amsterdam Noord, the sudden peacefulness is abrupt. To compensate for the stillness, Karel amuses us with chronicles from his past, ‘I once saw Go Go dancing at a nightclub in Groningen. All the dancers were teachers so I learnt how to Go Go dance from them. It was fun, and weird. I was almost naked, dancing in a speedo, which was super weird at first but also something to push me out of my comfort zone’. One thing’s for sure, Karel’s no wallflower. His curiosity has led him to test many waters over the 27 years he spent in Groningen: ‘I’ve had all kinds of hobbies,’ he kicks off, ‘speed skating, horseback riding, field hockey, I already mentioned dance. I tried out lots of different instruments; I played clarinet, saxophone, guitar, drums…’ He derails into future aspirations. ‘The ultimate goal is to become one of the statues at Dam square. Not one that doesn’t move, but one that never stops moving’. 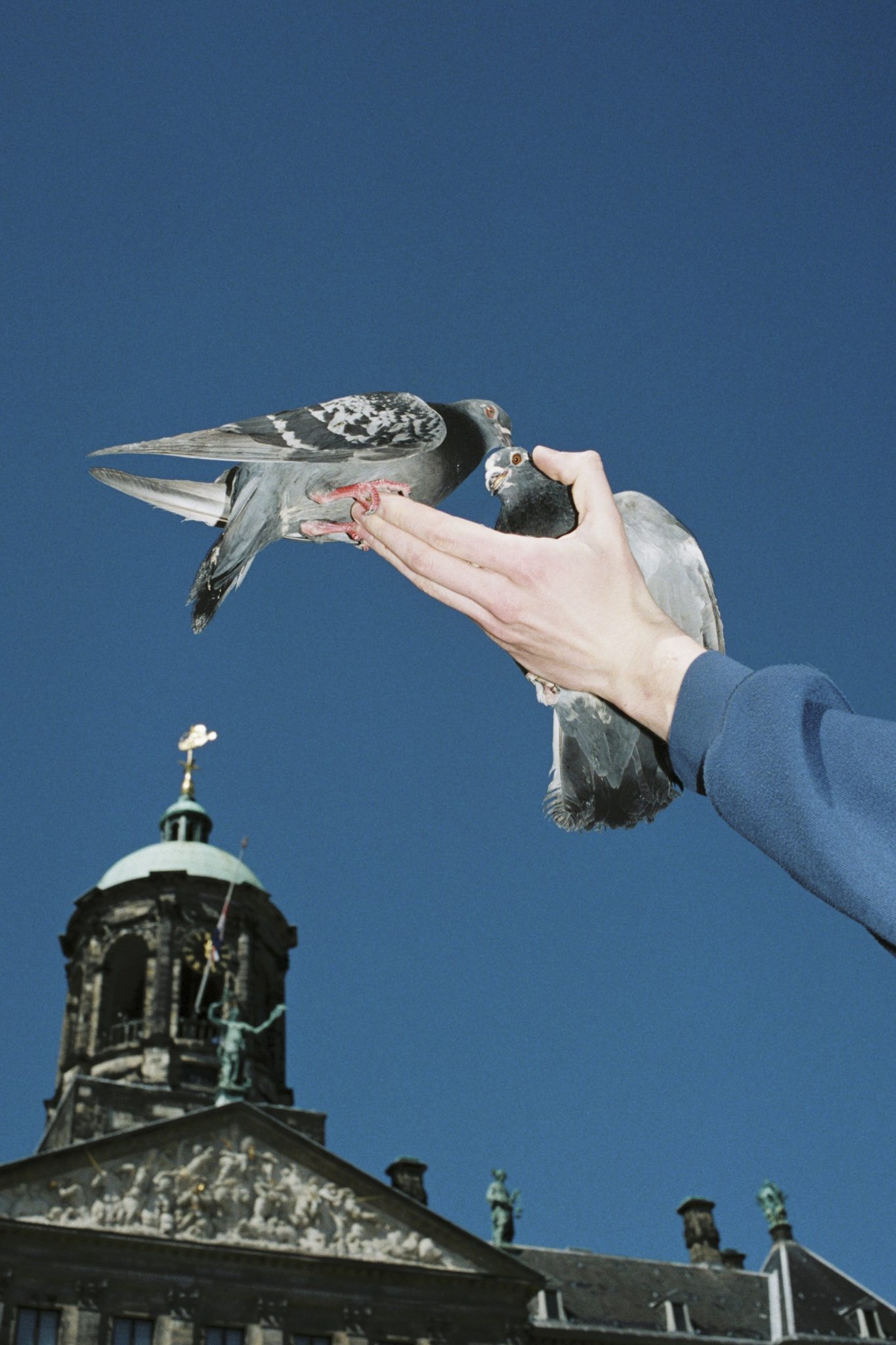 Karel’s assorted hobbies mirror the many musical projects he’s been involved with in the past, from the Friesian-equivalent of Happy Mondays’ percussionist (as part of the 11-headed Yakumo Orchestra) to drumming Santa Fé, in the punk band Fake O’s, and most recently, as the drummer of the lo-fi, synth-driven duo Idiott Smith. All this musical output materialized in Groningen, where the former creative center De Gym served as backdrop for the city’s bustling underground scene. De Gym was forced to close doors last year in March, and the move to Amsterdam must’ve meant faces in the crowds changing from friends to strangers. How has stepping out of this comfort zone affected his performance? ‘I think I find it easier, actually. The audience changes way more at each venue, which I prefer but I do miss De Gym. It was really a birthplace for a lot of bands, and had a nice communal feel.’ 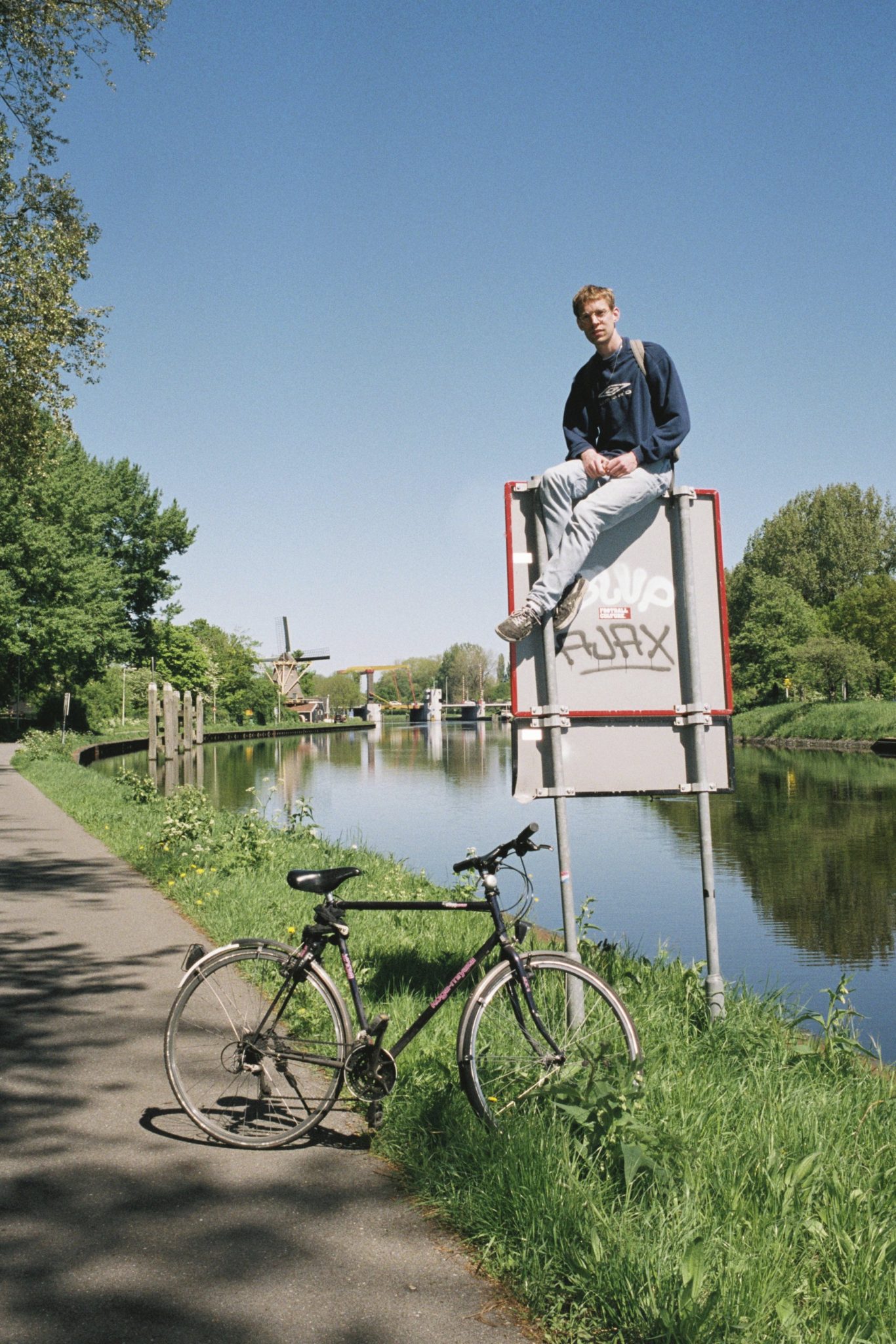 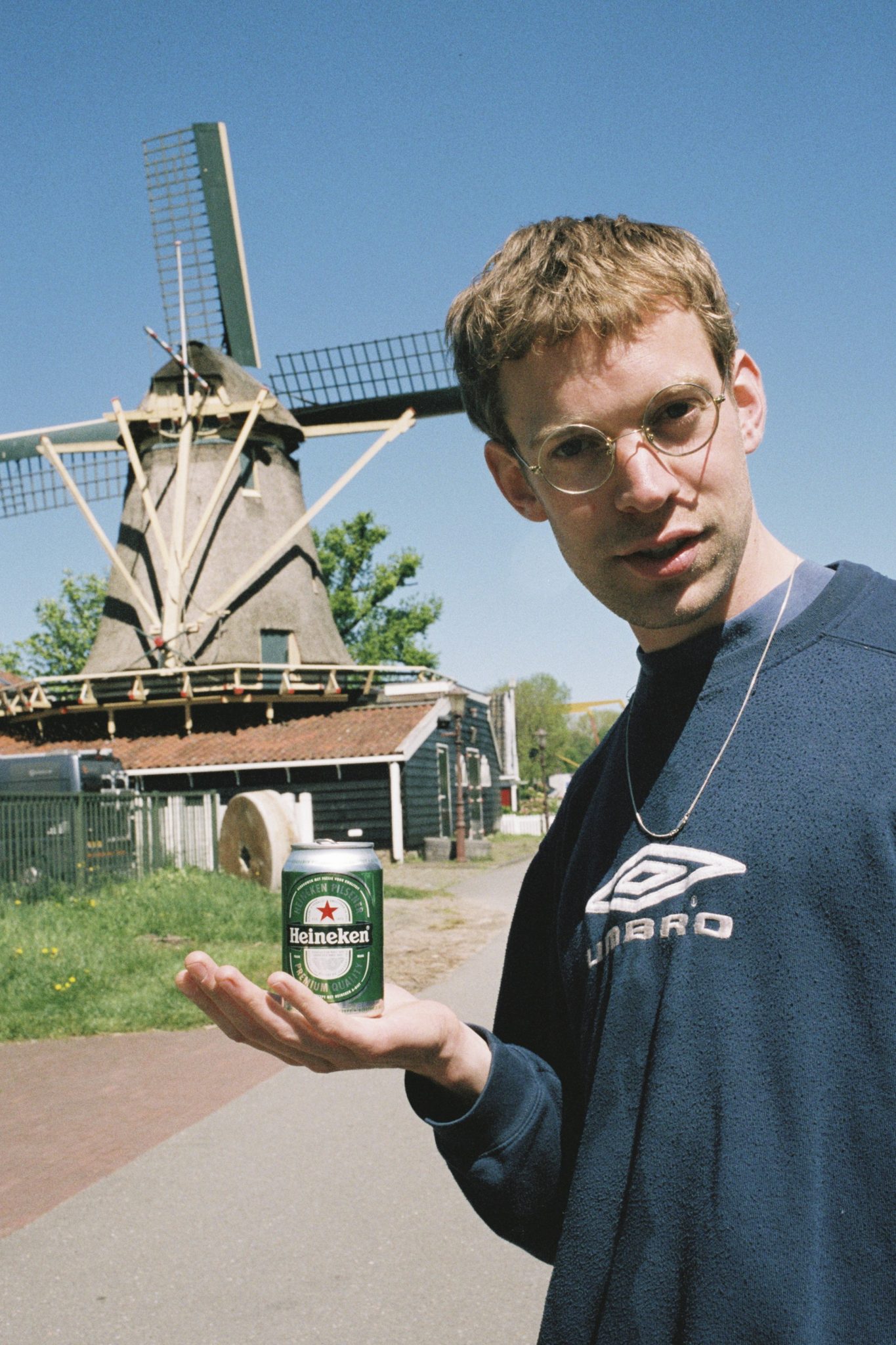 Abandoning our plan to visit the statue of famous Dutch musician André Hazes, we sit down for a beer at Elandsgracht. Karel goes missing. It’s not just during performances that Karel’s a climber; throughout the day he’s climbed various objects we pass along the way, from ledges to signs. We spot him up a lamp post nearby.

I need to socially recharge. Until that tension builds up again and I want to go out to see people again.

Karel’s cheerfully contagious spirit never seems to falter, not even when faced with a grim place of darkness – we steer our bikes toward the Torture Museum. Out of all the different modes of torture, the best is without a doubt The Flute of Shame, a medieval instrument of torture used to punish and put bad musicians to shame by hanging the device on the neck of the offender. ‘I’d definitely hand out the Flute of Shame to people who ask me things like, “why do you only play covers” or “where’s your band”, or say “good for you that you play your own music” in this horrible, patronizing way’. The truth is, Karel creates his music withdrawn to his own bedroom using an old school drum machine and keyboards. He records the music right onto his computer, transfers it to his iPhone and then hits ‘play’ to serve as his backing tracks during live sets. ‘I was first just making music at home, then performing it at house and birthday parties. Robert [as in Robert Lalkens, then De Gym-rep, now Subbacultcha booker] said I should try out a show in De Gym, it was with Jimmy Whispers.’ 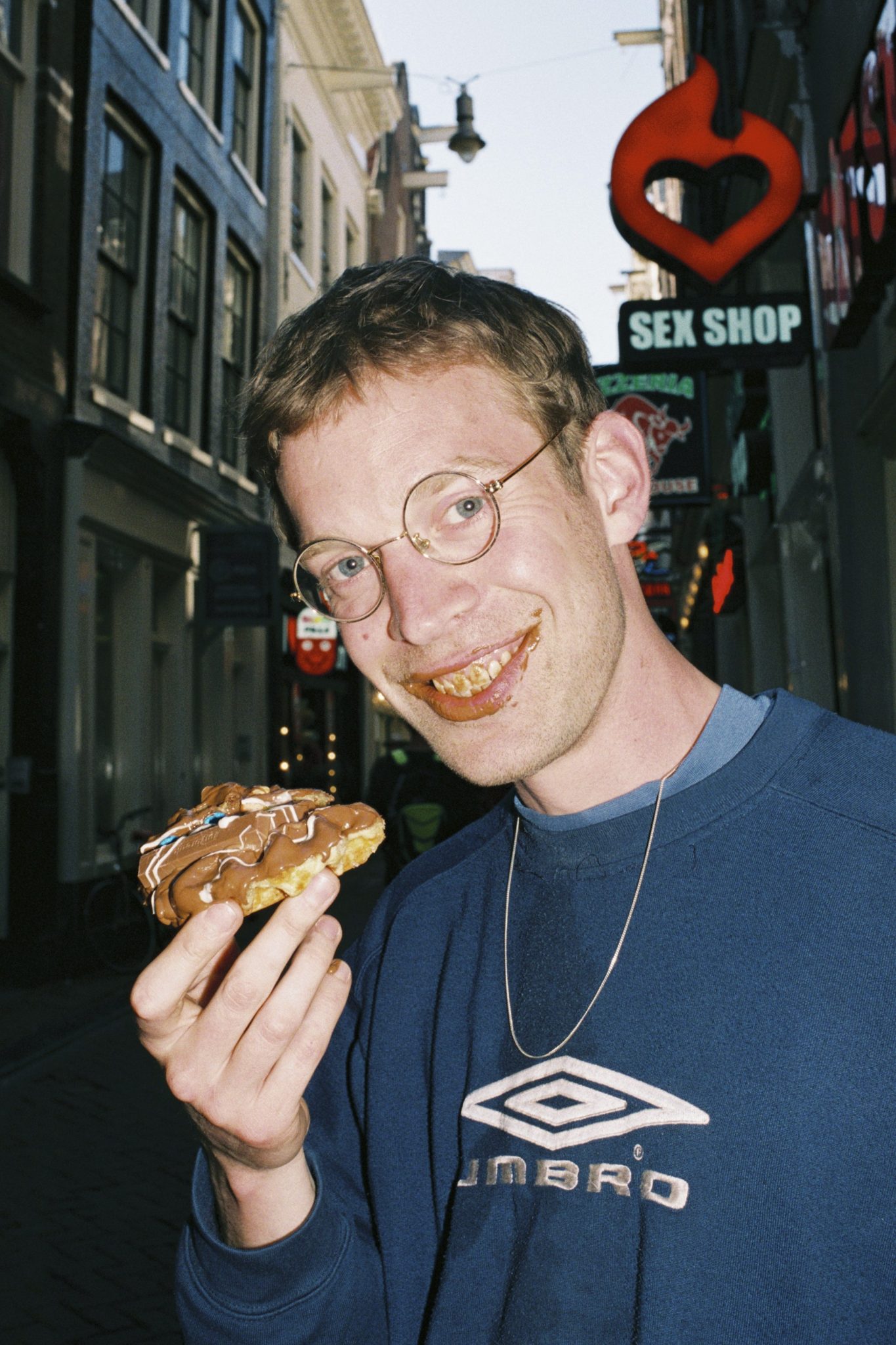 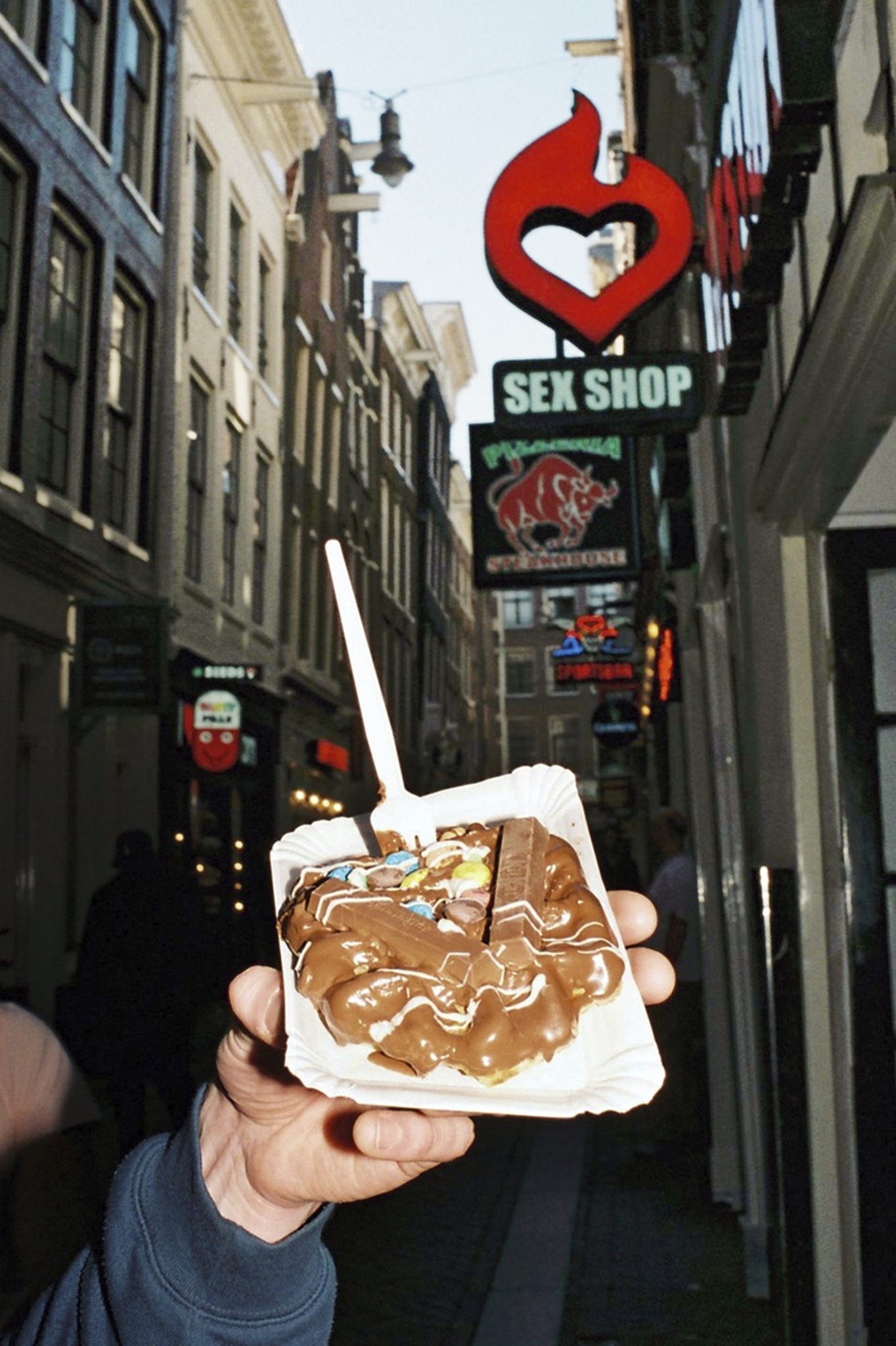 The all-consuming hustle of the day has built up Karel’s appetite so we set out to find a pastry shop in our last essential Amsterdam stop – the Red Light District. We pick out the most awful looking waffle, covered in chocolate that’s sat out for too many days. We ask for an extra strawberry, the order totaling up to a classic tourist trap rate – a whopping €7. Karel digs in, not minding Isolde and my repetition of the word ‘gross’. All the components are terrible but Karel finds a way to turn it into something relishable. 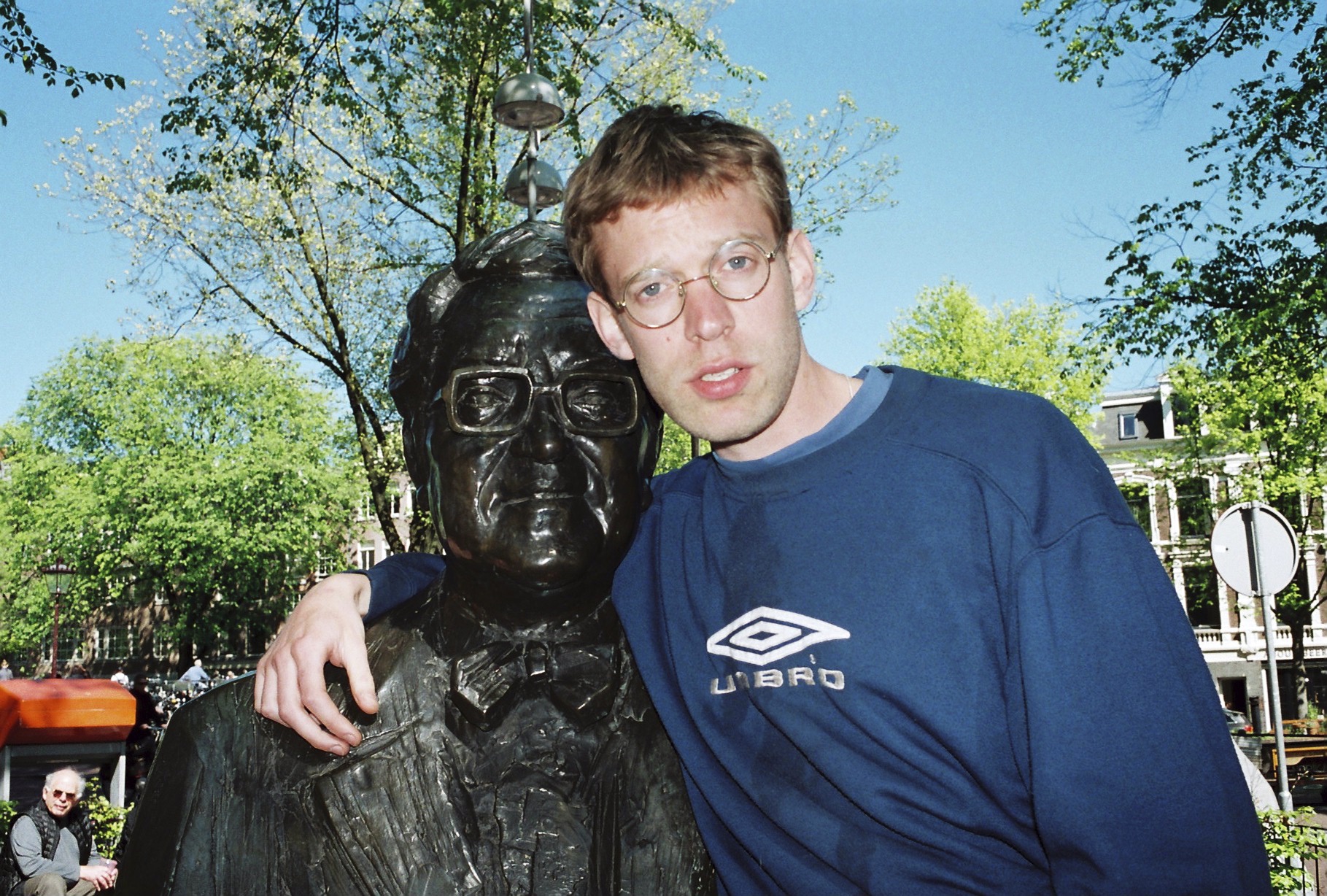 There’s an undeniable impact of the city on Karel, ‘I like it, it’s nice for all the things that you can do.’

I also couldn’t let go of myself the way can now, I didn’t feel as comfortable. Now I don’t really care.

His reflections extend to himself, ‘I don’t know if I would still be doing my solo thing if I was in Groningen or if it could get to the point where it’s at now.There’s one song I still play from the first set I did. The rest is so cringe now. I also couldn’t let go of myself the way can now, I didn’t feel as comfortable. Now I don’t really care. At my last show, I screamed in someone’s face [laughs]. I really felt like it was something I just needed to do.’ After a day of talking about his whims, it occurs to me Karel’s dealt his own fortuitous hand. ‘Nowadays I’m pretty fine with where I am. I have the feeling like it’s going somewhere, I don’t know where, but I like how it’s evolving’. 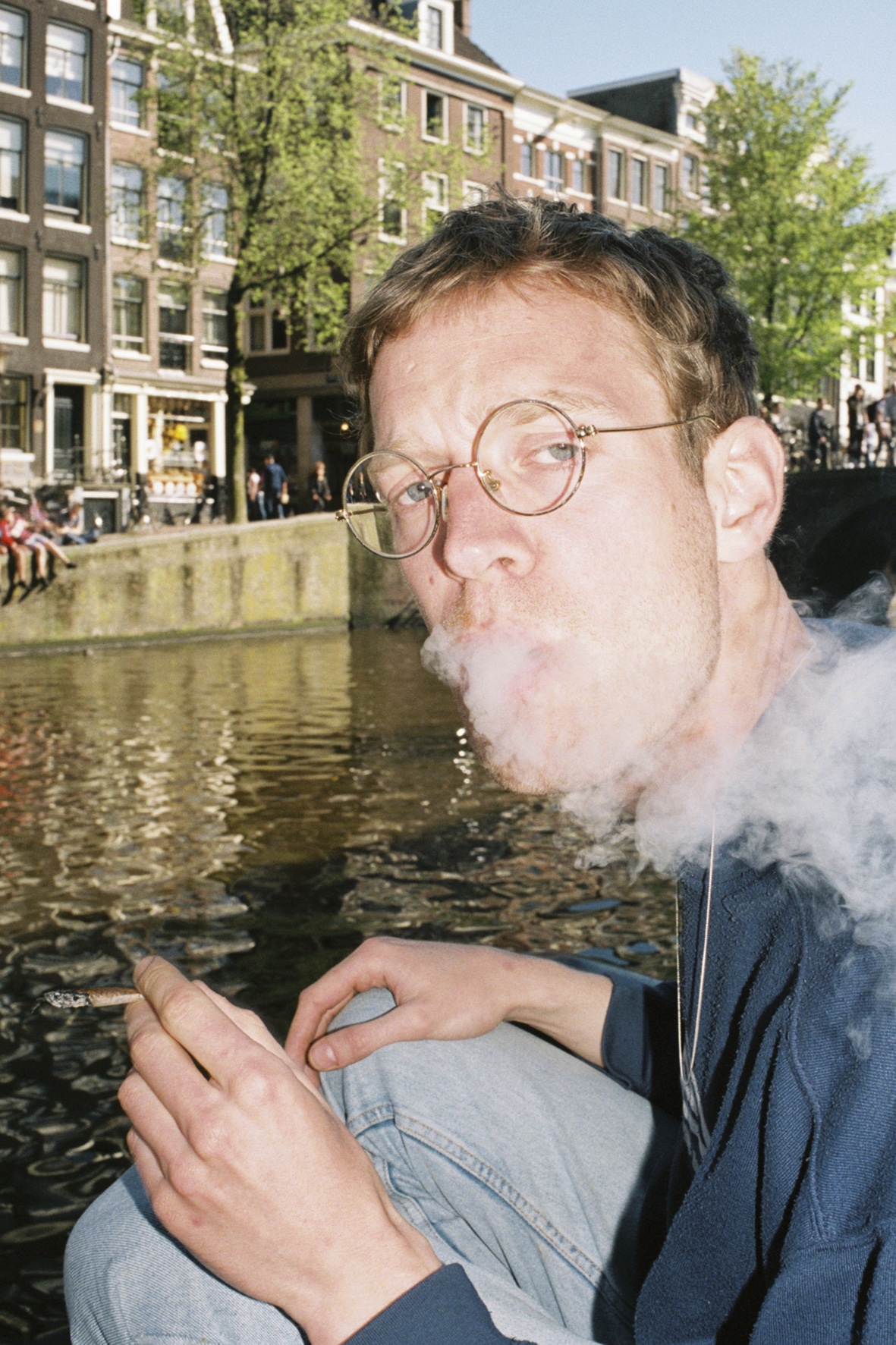 Karel plays s105 on 19 July with BEA1991, and Internet Explorer, Berlin with BEA1991 + Raven Artson on 20 July. Both shows are free for members. You can also catch him at Down The Rabbit Hole Festival at the Future Fuzzy Field on Saturday, 30 June. 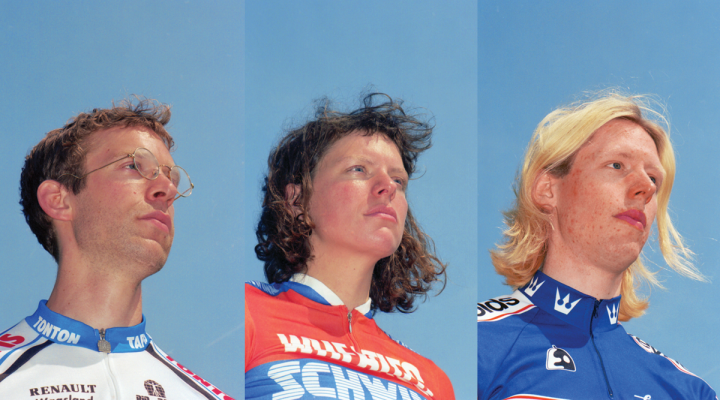 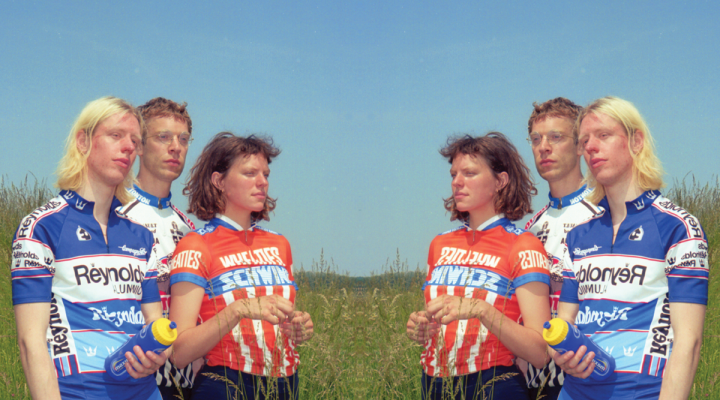 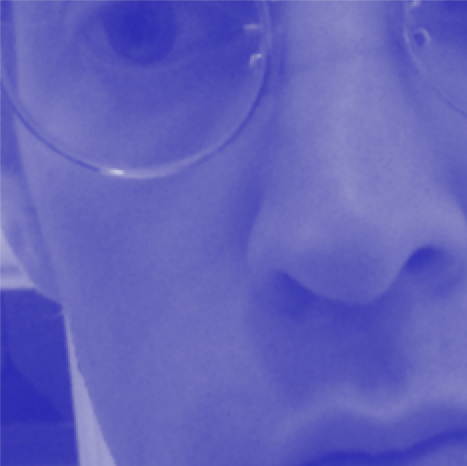