Some months ago Max Favetti strolled into the Subbacultcha office, blowing us away with his sunshine-coloured dungarees and lyrical mannerisms. Currently based in Amsterdam, the Australian-Italian filmmaker is usually armed with an analogue camera, ready to make art out of the world around him. So naturally, when he embarked on a boat trip island- hopping around Greece, we asked him to write about the experience. A hazy dream of an idyllic summer. Warm souls, hot coffee and life at sea. 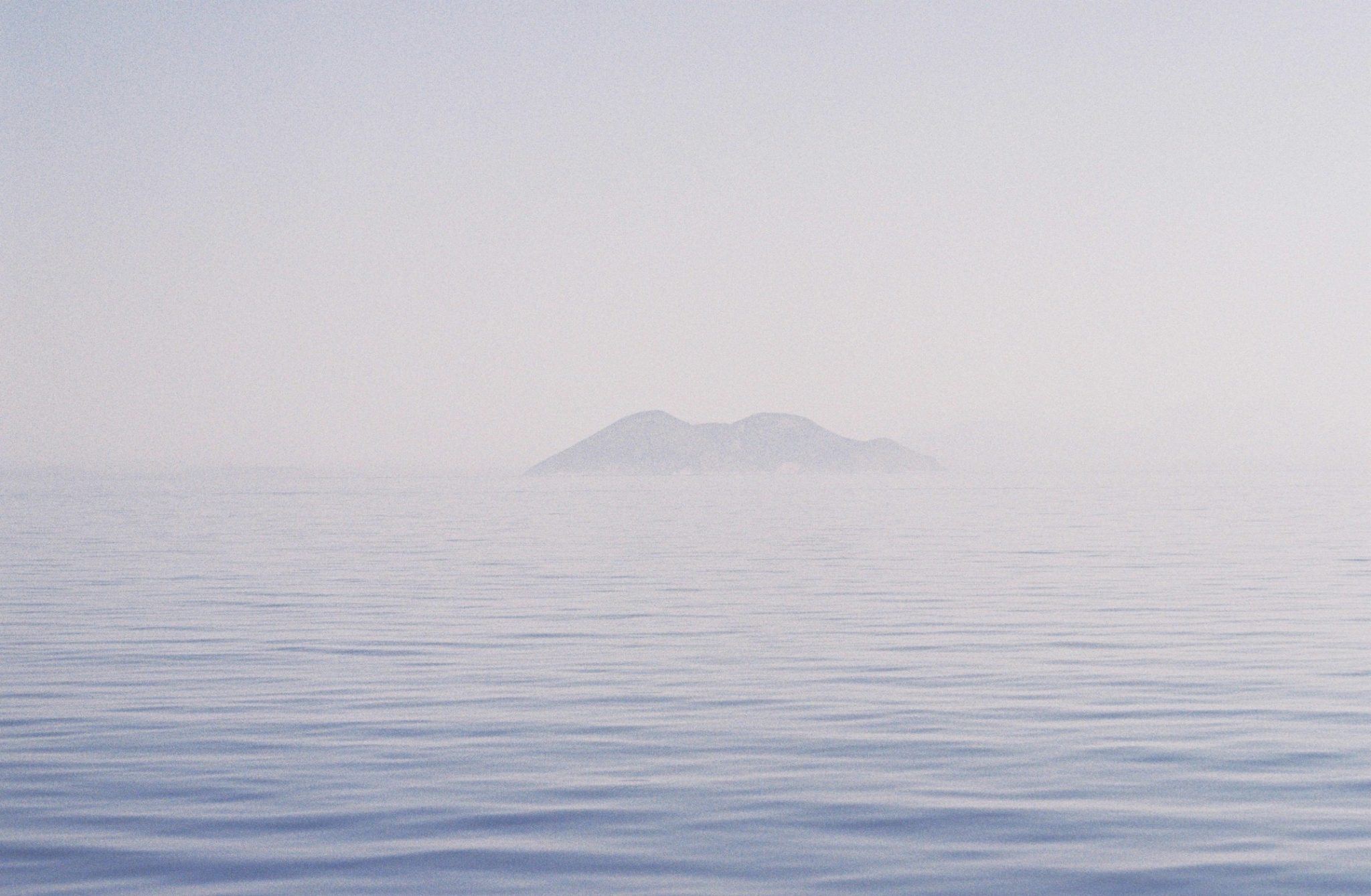 This maritime retreat was always meant to be healing and it has been all that and more, that special kind of healing where you not only replace things that have fallen away, but erect edifices you had yet to conceive. We arise in the tight cabin, coated in a sheen, swaying on the azure sea. The small windows pockmarked about that let in small funnels of thalassic breeze do little to stifle the heat. It’s inescapable here and a vast majority of the time, that’s welcomed. There is little inconvenience caused, as there is only a brief, vacant command of the body required to quell your unease and by this, the third day, we had formed an unspoken morning ritual between us.

A quick brushing of pegs – so that we may laugh in one anothers faces uncurbed – a filling of the whistle kettle, a lighting of the stove and a rinsing of the french press is all that’s required below. Once done, the water yet a rolling boil, we clamber up the stairs and jump off the rear (starboard?), arms stretched above in a genuine attempt at a rip entry dive that elicits not the applause but the guffaw of onlookers in its floppy execution. The water is so warm and the coastline so varied you must take it in and then take it in again: the horse spurs and bluffs and valleys, punctuated with abodes in impossible positions, alone on jagged points, burning bright yellow in the sun. 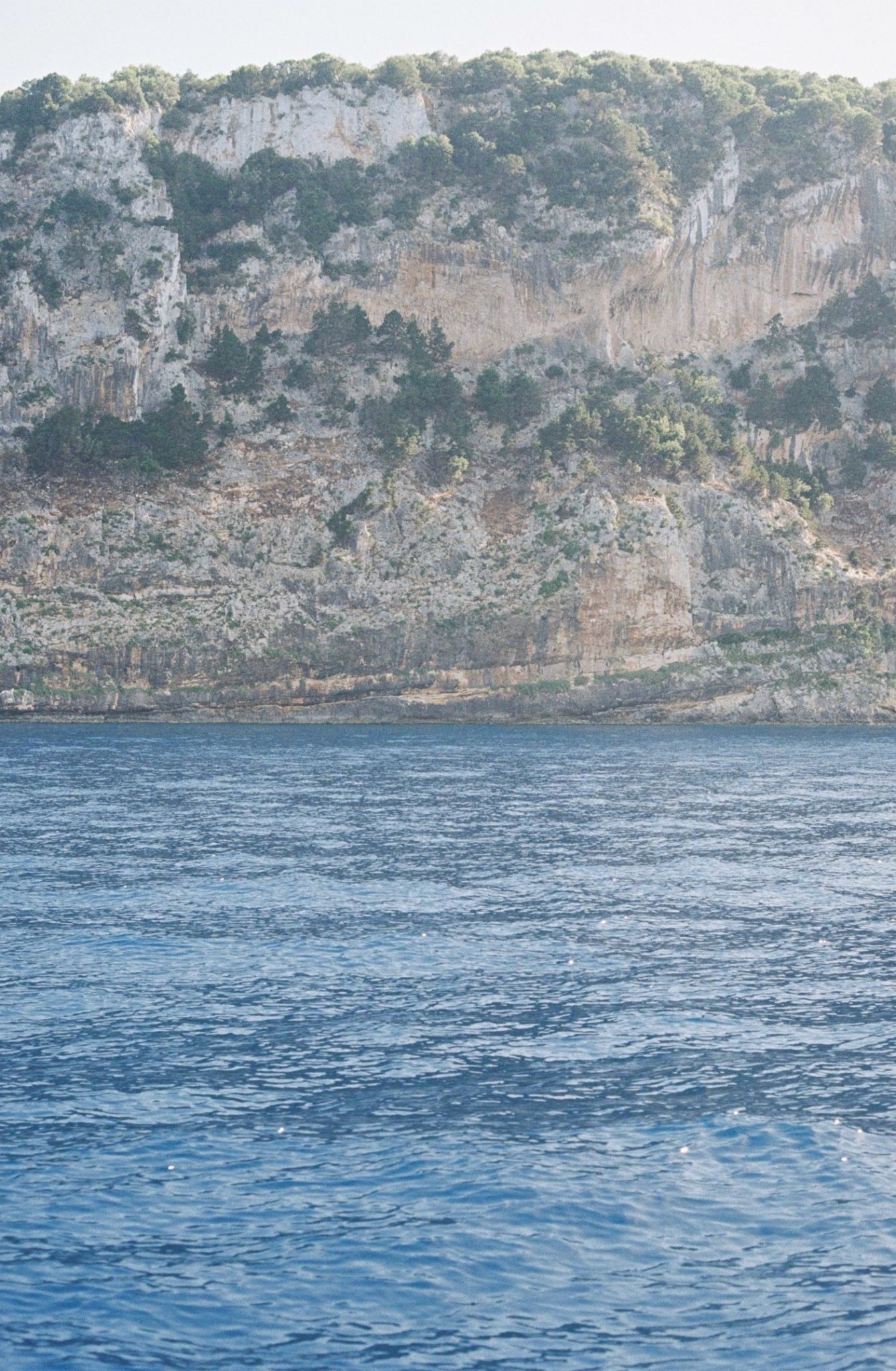 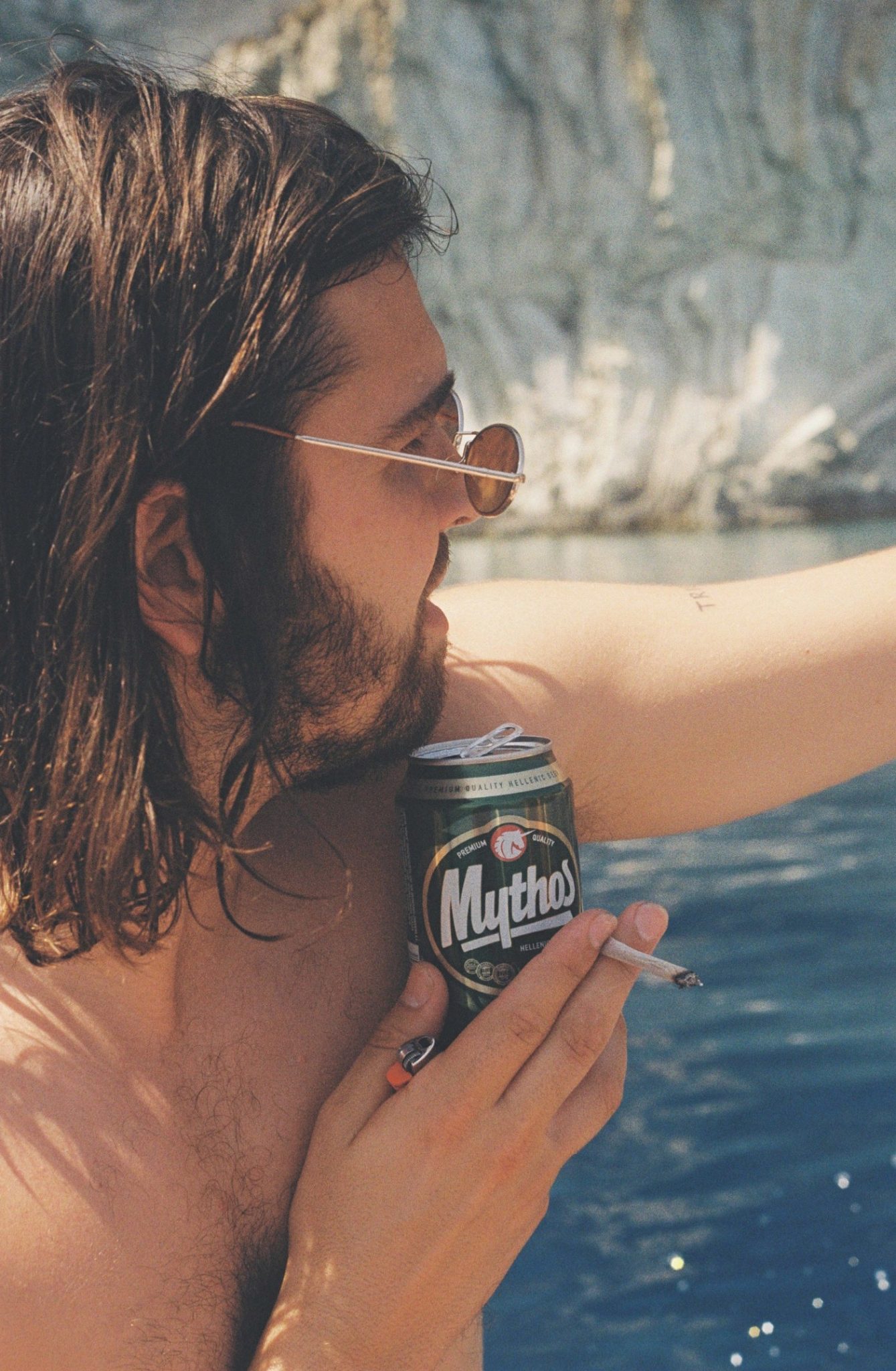 We crawl back and hose off and push the plunger down, setting down rubber soled mugs upon the front deck to roll cigarettes and sit close to one another, touching brown arms and backs and giggle as we continue to write this fantasy together. After a period of splaying we are cajoled to action by the captain, whom it only feels appropriate to call such because he knows how to steer the boat and tie the knots. Every other deed and word sees him ranked the Arbiter of Fun, languidly turning the huge leather wheel with a wine glass of pinot noir on the rocks perpetually in his fist. There is a scurrying about, a pulling in of things and dropping out of others. We are beginning to learn our roles for setting off and by that I mean the four of us befuddle about one job, piecing together the half attention we all held at the initial instruction, until the task is pieced together complete.

We glide forward, small motor whirring until the wind is at out backs. So smooth it is that the only appropriate action to take is to grab pillows and gather at the front, each in our set positions, mine being feet at the front, lying back and looking up the side sail mast, blocking out the sun with a hand resting on my brow, the other folding a book in half, put down only to stroke the skin of whoever is closest, dancing fingers letting them know I’m here and I love them. What follows then is a clockwork spell: so absorbed are we in the tomes we chose or the conversation had that when stock is taken of our surrounds, we find paradise can take another shape yet again. On this day it is that of an island bay, surrounded by fierce mountain tops that buffer the wind, creating a blue so still it could pass for glass to be sauntered to the sand. 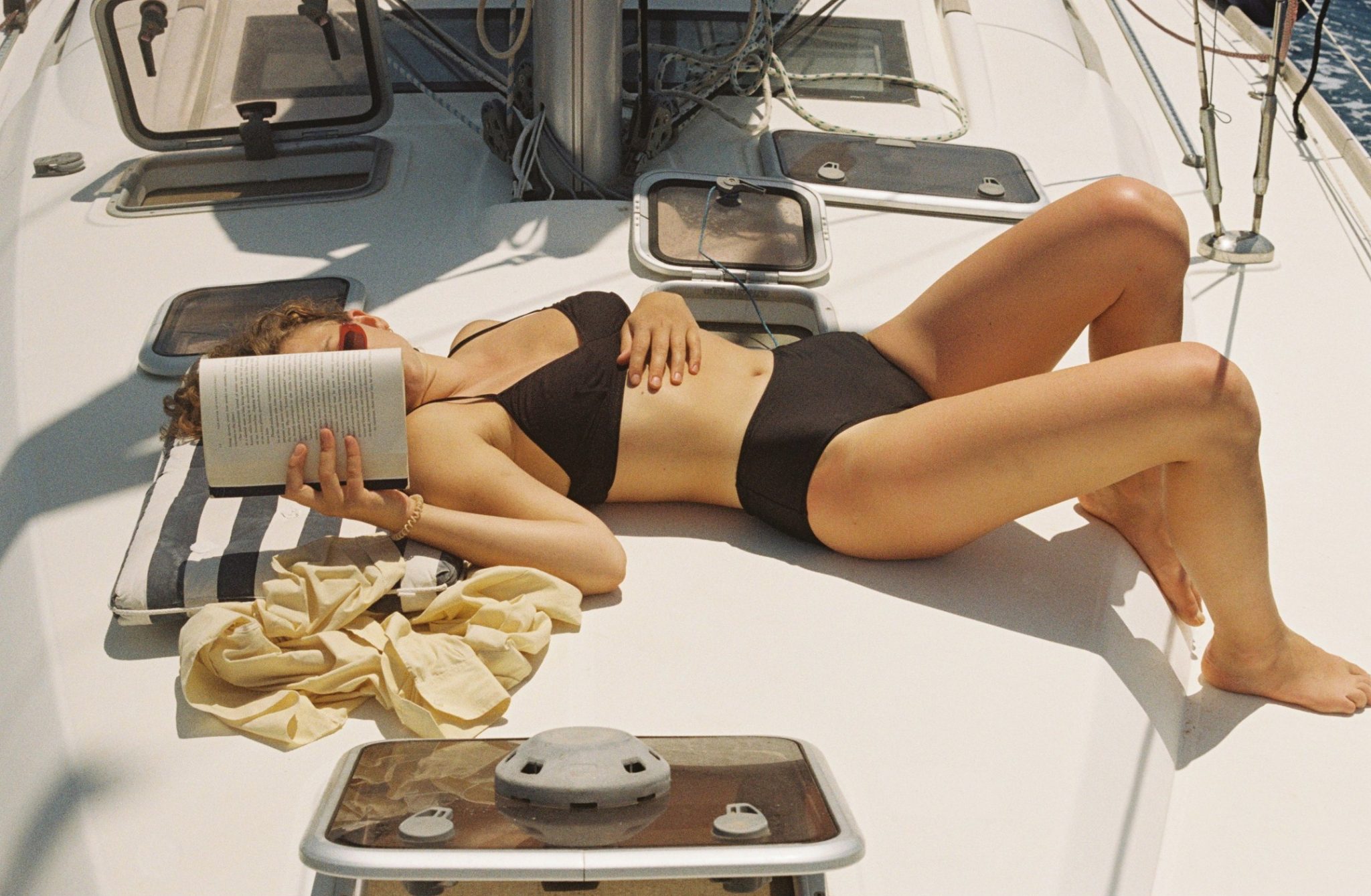 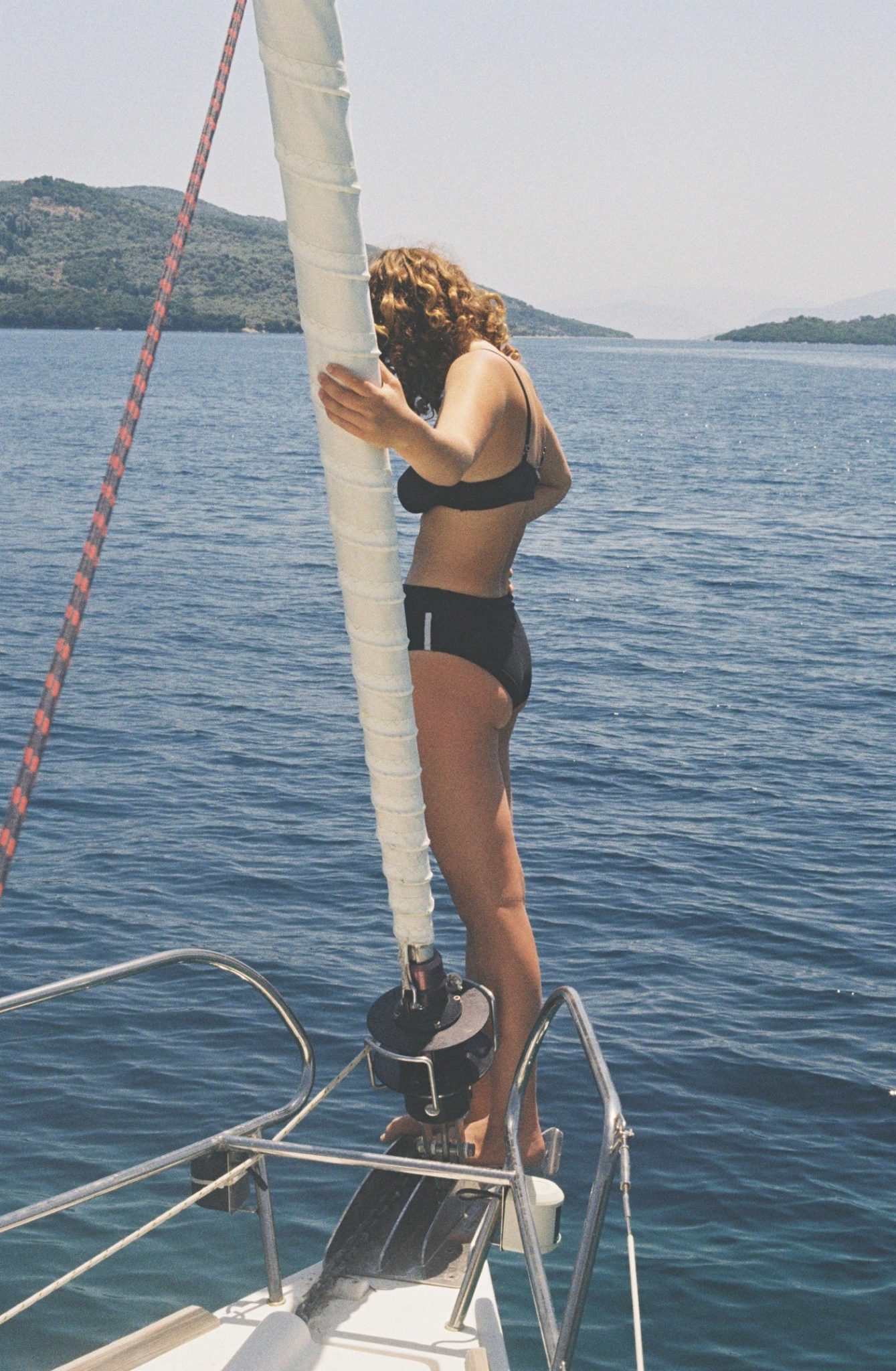 The clinking chain signalling a dropping anchor is a call to lethargy once more, as sailing absentmindedly from one nirvana to the next is something to be marked, and we celebrate with a pouring of chardonnay and a dip to cool off all that sedentary toasting and sunned ponderence. There is talk of food rations remaining and a meandering plan of how to make a meal of it, before being promptly abandoned, as one of us points a lazy finger to a shoreside taverna not fifty metres off the portside bow (?). I packed an outfit specifically for this moment but find it sans a key component, convinced at the last minute by my travel companion that it was a bit much to bring along the Italian white leather boots for a singular donning. Popping my Barrymore collar over the lapel of my grey and purple checkered blazer, I straddle my corduroy red flared legs over the back railing and jump aboard the tender, adidas slip ons first. We are beyond capacity and the rubber dingy is sinking by the time we arrive at the restaurant dock, but we are too impaired by hysterics to care for wet bums. We are helped ashore by an unamused attendant, our tanned, smiling faces flashing white teeth as we ask for a table on the waters edge, where fish lap at bread crumbs tossed by patrons. I immediately get the sense that we are “that” party at the establishment, the one that turns the heads of some and is murmured about between spoonfuls of soup and forkfuls of stifado by others, the gathering that has the waiter exasperated when she drops our docket at the pass.

The copper carafes of rosé never seem to cease, we drink it in and each other, exchanging tales of teenagehood and lessons learned, our ambitions burning and goals yet to meet, happenings had and about to be undertaken, life yet to be lived while we sit here and live it. I am again overwhelmed as I turn from face to face, my knees folded up to my chin as my bare feet curl over the base of my wicker chair. The sun rolls slowly downward, turning the sky purple and orange and in streaks, an impossible cobalt blue. There is a final vat of rosé ordered with the bill and the deep gets deeper, until we finally tumble back into our teeny tiny party boat, waving the navigation torch light in the darkness like a disco ball as the bellicosity betwixt us rumbles, splitting the seabed and sinking us yet again. We clamber aboard, one by drunken one, ripping off our Sunday best and brushing teeth together, the bristles wrapping around molars shaking in glee. We fall in a heap and feel the promise of heat ahead. We try to sleep for a time in the cabin and finally relent, realising there is no failure in the victory of slumbering atop. Pulling the manchester behind us we collapse and swaddle at that well worn tip and drift, adrift. The moon is full and hangs bright still at dawn, pendant just above a mountain peak, like a tack poised to burst a luminescent water balloon.

I fall asleep, caked in glowing goo and baked in amorous arms. 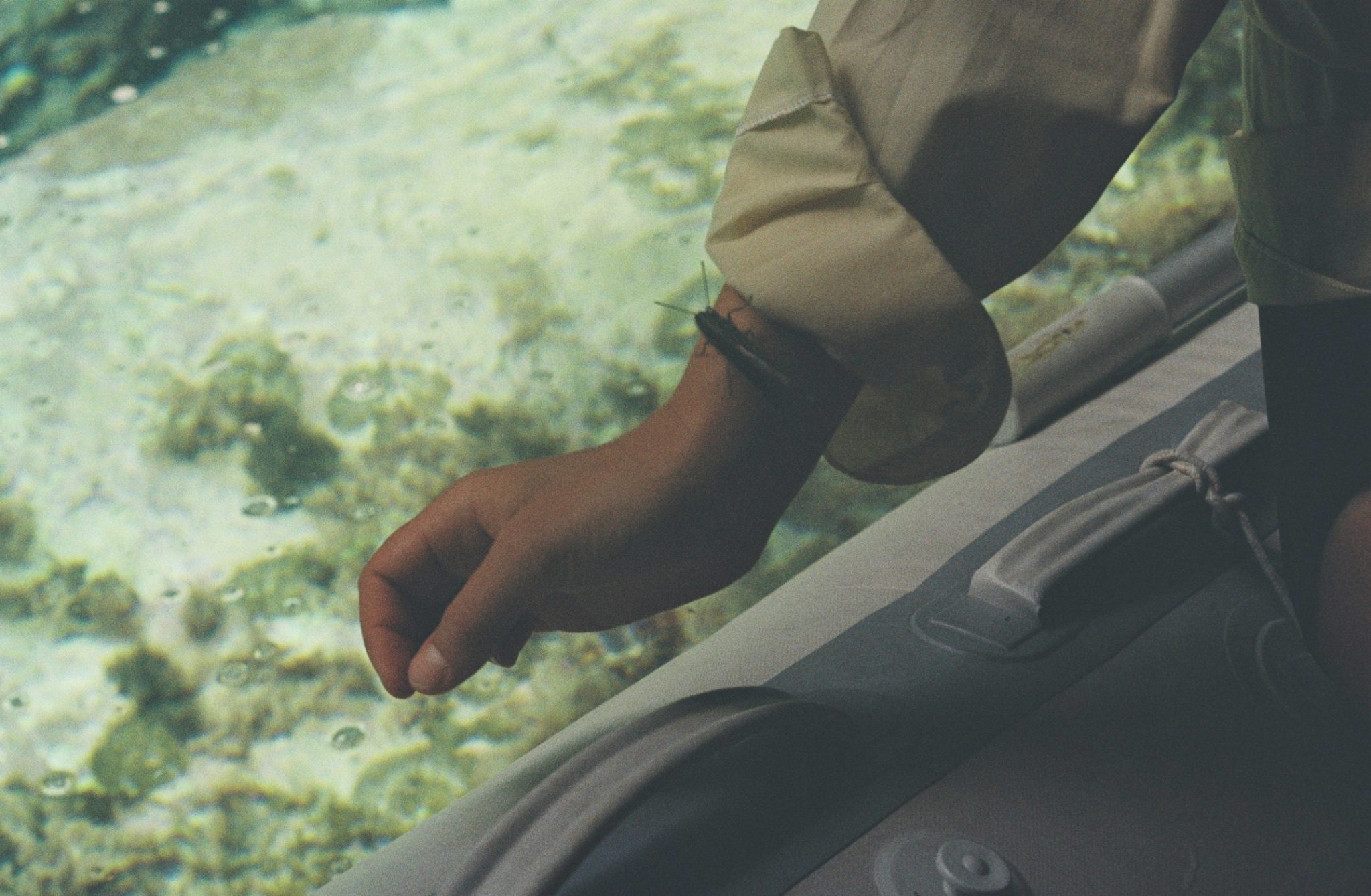 Drift, Adrift was featured in The Void #4.