Soft synth that envelops you in a marshmallow cloud. Both sentimental and sexy. We caught up with Fabian, Max and Niklas over an excellent brunch at Café DS and chatted about what’s so cool about Hamburg, their appetite and soft boiled eggs. 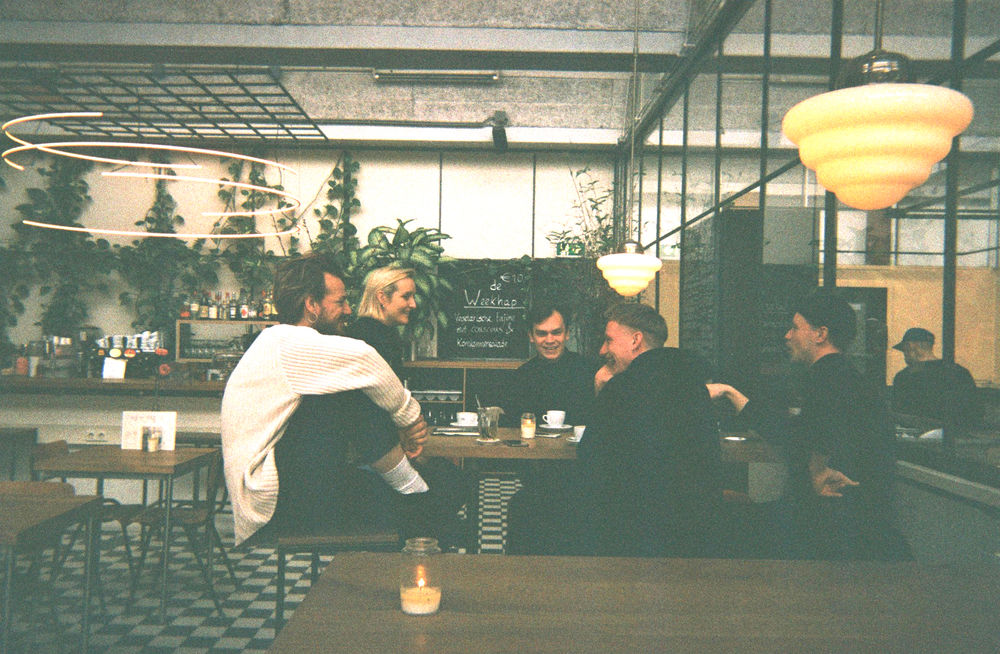 Hey, nice to meet you all! How did you meet?
Fabian: Max and I are brothers, and Niklas is our nephew. So I guess we met when we were zero years old.

How do you rehearse if part of you still lives in Hamburg, via Skype?
Max: We always have two super rough days before a gig where we rehearse pretty hardcore. But on the other hand, it’s nice to have two hometowns. Sometimes we go to the same gigs, while we’re in different cities. So when black midi performed in Hamburg, Fabian went to check them out in Amsterdam, on different days of course.

‘Brunchpop … I just imagine croissants and romantic music.
Yeah, that’s what it is, hehe.’

How is the Hamburg music scene? Nobody ever seems to talk about it, if you compare it to Berlin.
Fabian: Hamburg was pretty famous for music in the ’90s. There was this big indie scene and there were so many German indie alternative bands. Especially the whole genre Hamburger Schule; it ’s kind of intellectual German indie-pop.

Your sound seems so sweet and dreamy?
Fabian: Yeah, although we’ve also had a post-rock, hard rock and eighties metal phase. And Niklaas listens to death metal nowadays. It’s pretty hard to define our genre cause it’s so many influences.

Your music reminds me of a Lynch movie, but then a romantic version.  Is music a way to show your soft, melancholic side?
Niklas: Yes. And we just love warmish sounds; guitars, synths.

‘It just sounds so harsh, but in reality, our music is just really soft.’

I read somewhere you call your genre ‘brunchpop’ and ‘punk deluxe’. That’s why I asked you for brunch, actually. Now, what’s in a name?
Fabian: When I was in Prague I saw someone wearing a white jeans jacket with glittery letters ‘punk deluxe’ on it. And brunchpop: we once played in Amsterdam with Steve French,  a post-punkish band. They call their music grungepop, so we used brunchpop because it rhymes and then we just chose to call it this way.

It sounds so cute. I just imagine croissants and romantic music.
Yeah, that’s what it is, hehe.

Do you eat well on tour actually?
Max: We always have a nice breakfast. And we always bring our own food. We don’t go to Burger King and stuff like that.

What’s your favourite breakfast then?
Fabian: The perfectly boiled soft egg on a croissant. With a lot of extra butter on the croissant. And salt.
Max: Probably coffee. Preferably a cappuccino.
Fabian: That’s not food?!
Niklas: I only have breakfast on the weekend.
Fabian: Guys, you’re embarrassing. How can you not have breakfast?
Niklas: Okay, if I do, I prefer bread and cheese. And eggs. Not too soft, and not too hard.
Fabian: You make the best scrambled eggs.
All: Yeah they’re the best.

What’s the last thing you would eat before you die?
Fabian: I would probably just have the croissant with the soft boiled egg.
Max: I would go for a pizza Napoli. Sardines, olives, cheese, mmmm.
Fabian: No kroketten?
Max: No, I’ve had enough of them last night.

Did you eat them the Dutch way? A soft bun, mustard and mayo on each side, then smash the kroket over the bun?
Niklas: Okay that sounds really really crazy.
Fabian: Let’s have it when we come home!

Just checking: what do you drink after the show?
Max: Vodka shots. And then it always goes down.

Das Bisschen Totschlag are performing 23 March at s105, De School. The show is free for members.