4 AM is the most spiritual hour of the day. When night dissolves into day. The magic hour. The liminoid phase of dreaming. For this project, we ask artists to set their alarm clock at 4 AM and create something covering their lucid dream state at that moment. Divine creations at the most ungodly hour. 4 AMEN. Frisian multidisciplinary artist Hedwich Rooks set her alarm at 4 AM and created a short story for us, along with a work of art.

Could you describe how you felt that night?

4 AM, my alarm goes off.  I start searching obsessively for objects in my room, listening to music and trying to impose feelings to help me recreate the dream I had. This way, I hoped the dream will continue in reality. During the whole collecting process, I was really thirsty, so I drank a lot of water. I was also craving french toast with black sesame ice-cream, but didn’t have any of those ingredients at home. Around 6:30 AM I fell asleep again.

What was that dream?

An imaginary friend was looking for her golden cigarette.

We were searching through porcelain pastel houses that broke through fragility.

A garden full of protected bamboo welcomed me from nowhere.

I took one bamboo out of the earth but discovered rows of surveillance that protected the area.

Taking a shortcut, but the protected area multiplied everywhere I came.

A futuristic vehicle that could ride on water and land came on my path to flee.

I wore a fluorescent suit.

Full of courage, I continued looking for the golden cigarette.

I went across lakes and through illuminated, hilly forests.

The path resulted in a narrow street where a party was going on.

I still watched over my bamboo.

And went out for the surveillance.

Suddenly a whole crowd of eccentric people passed by in the narrow street,

who had made flutes from the same kind of bamboos which produces beautiful sublime music.

I got out of my futuristic vehicle and continued by foot.

The further I went, the more various bamboo instruments with a very pure sound passed by.

Later I heard 80’s disco songs, I came closer and discovered a row of women synchronously dancing and singing an almost inhuman sound.

It turned out to be an introduction to an exhibition you were automatically guided to.

The exhibition space consisted of large cylindrical illuminated water bins where organic sculptures moved in, alternated by people dancing in the water.

The walls were neon pink.

From the ceiling a row of people with long stilts appeared like puppet dolls.

They were dressed in robes of paper mache and wore African tribal masks to cover their faces.

In the air they were synchronously dancing and singing, which continued endlessly between all works of art.

I thought it was out of this world, when suddenly…

What music where you listening to at 4 AM? 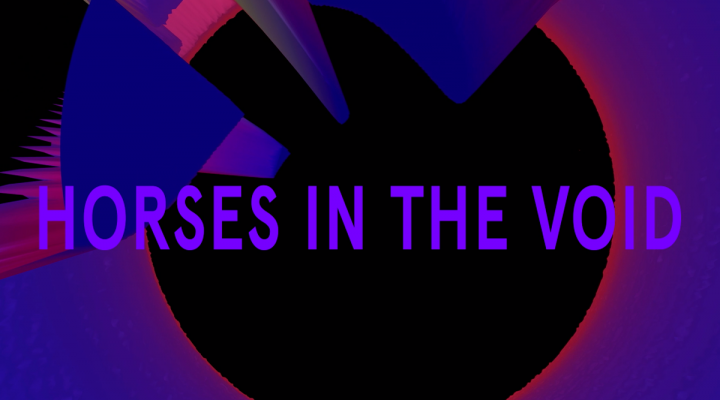 Horses in the Void #2