Swan Meat is the moniker of Cologne-based artist Reba Fay. Originally from D.C., she still has a soft spot for the sweaty hardcore scene integral to the city. Her room captures the essence of her worldview in miniature size —  from violins and guitars, to videogames and Ableton — serving as an altar to create her sublime sound.

Hey Reba, how are you?

I’m good, thank you! Staying at my parents’ house in the States right now for the holidays. And visiting my newborn baby brother.

So sweet, congratulations! Where are you currently based?

I’ve been living in Cologne for a year and a half now. I’m originally from Springfield, Virginia – pretty close to Washington D.C. It’s easier to say I’m from D.C. as I basically spent my teenage years hanging out there.

So growing up in Washington DC, how did you experience the music scene there?

Did you just roll into the industry or was it an organic move?

Growing up, I would be involved in musical theatre and in plays that my mom produced. She’s very musical. I also played the violin and the guitar for about 10 years. But nothing big. I’d like to say I’m a casual guitar player. I can’t stand that type of music anymore though, haha.

So how did your music get infused with this electronic, almost lyrical sound?

I did a lot of poetry workshops. But after a while, I got bored with simply setting text to paper. That’s when I started putting the text into Ableton and making tracks out of it. It usually turned into this experimental sample-like collage, which triggered me to start sharing my music. Suddenly I found myself wanting to produce more of it and share it.

Could you say that music is a means to make poetry more extroverted?

Honestly, I don’t really incorporate the writing in the production process too much anymore. First I started building tracks around poems. Then I would pair the vocal inflexion of a poem with a sonic inflexion for example. Or, I’d add a percussive element that seemed to enhance the depth or sonic quality of the word that I was choosing. I also realised words aren’t enough to convey what I wanted to convey.

What would be your ideal audience response?

With this last record, I was 100% thinking of cinematic music and video game music. That makes me feel most ecstatic, and playing around with these very earnest emotional musical tropes. My last EP was about love. Darkest, most happy periods of my life. Some songs sound angry and I wanna break stuff when I listen to this. Writing music shouldn’t be selfish.

What’s your view on the online and offline world?

I think for your sanity offline should be more important, but unfortunately, the online one is crucial to every musician. It’s something I struggle with. Strangely enough, being online and being a musician working online has made me more aware of my body than I should be. The internet should be a democratised nebulous space where the body is not important. I don’t want to be in that internet headspace at all.

Who do you dream of collaborating with one day?

I honestly think my dream collaborator is Nobuo Uematsu, who has composed music for so many iconic games it’s impossible to list them all here, but his dreamiest scores include those for Chrono Trigger, the greatest work of art of all time, and the Final Fantasy series. I’m too terrible a musician to even be worthy of his presence, to be honest, but it would be an honour to merely watch such a genius at work – only in dreams, only in dreams…

Do you feel like your music resembles a ritual?

I would. Working in software, I feel, is especially ritualistic. What is programming if not praying to a demented god? On an interface level, inasmuch as I have a workflow, I’m engaging in ritual, though I don’t know if it’s magical so much as it is desperate. Is Serum a prayer object? EQing a pad like lighting a candle? I suppose I have to think of it this way, otherwise, the whole songwriting process feels cold and clinical.

What are you listening to these days?

Some things on repeat right now are: Grafts by Kara-Lis Coverdale, Disco Volante by Mr Bungle, and Fluquor by my idol Onoken, from the Demo 2.0 game.

How do you look at the world around you?

With great awe and great terror.

Swan Meat plays 16 February at Horses in the Void at OCCII, Amsterdam. Show free for members, in collaboration with Goethe-Institut. 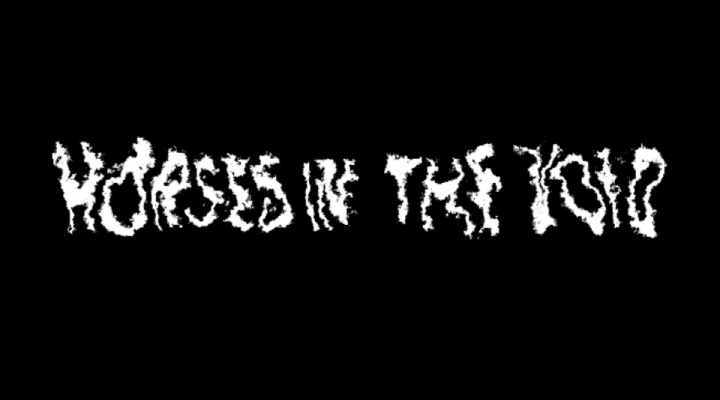 Horses in the Void